Global Warming Skepticism to Be Over by Christmas?

Now that the La Nina is over, the lower atmosphere is heating up noticeably. GISS just reported the second warmest May in their records, with a surface anomaly of +0.65°C, which is equal to 1998's anomaly within measurement error.

The lower troposphere is warming too -- at the moment my estimate of June's anomaly, based on the first half of the daily UAH measurements, is +0.46°C, which would rank 2nd after 1998. (My method, which is only a bit more sophisticated than monkeys throwing poo at a wall, is explained here; so far (viz. this year) it's generally been good to about ±0.05°C, and the average could still swing by several hundreds of a degree by the end of the month. Note UAH's caveat.)

If there is a strong El Nino later this year -- chances are said to be 50-50 -- this AGW skepticism thing could be over by Christmas. 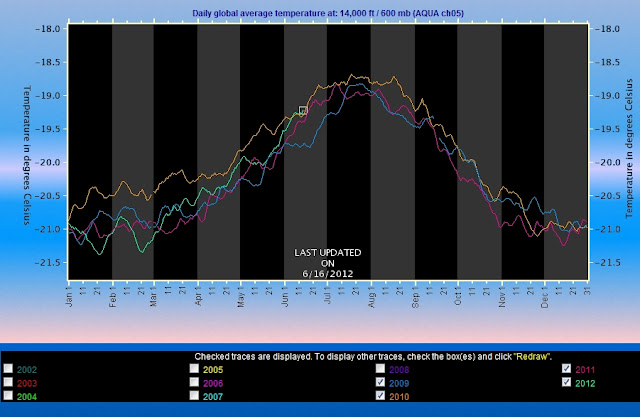 Why would our "skepticism " be over? El Nino is a natural event, and would highlight even more that any warming trends are primarily natural rather than anthropogenic.

Dave, you need to learn more about the weather. Read Bastardi's take on this coming winter...

My local weatherman has been saying the same thing. The Japanese model he watches was just about the only one that got last winter's warmth right and it is repeating the 76-77 winter forecast: brutal Midwest and Eastern U.S. cold.

William: Read Foster and Rahmstorf, Envir Res Lett 6 (2001) -- after accounting for ENSO, solar irradiance, and volcanic activity, they derive the underlying AGW trend of 0.14-0.17 C/decade. Right now we're on the downside of this underlying trend; an El Nino will correct for that.

Public skepticism could be over, because a big jump in warming could make a big impression on people who don't follow the intricacies of the debate, especially the influence of ENSO.

And it would definitively end the "no warming since 1998" myth.

You do not know what you are talking about. The nino coming on is nothing but a glorified kelvin flop, will last for 9 months or so as is common in cold pdo.s SInce the start of the cold pdo the trend of gobal temps can be seen here
http://policlimate.com/climate/cfsr_t2m_2011.png
That was precisely the forecast I made on Oreilly 3 years ago.

A poor track record. I forecasted the last two dips and the major spring rise, also the fall that can be seen in all the models coming this fall and winter.

Moreover if you actually followed what has gone on in the last pdo flip you would see what is coming.. the enso will be neutral to negative again by next summer, and already the climate models are seeing it WE ARE IN A COLD PDO, WITH LA NINAS LASTING THE AVERAGE OF 21 MONTHS AND SHORT LIVED EL NINOS. THIS CREATES THE JAGGED FALL THAT IS PART OF CLIMATE THEORY AND WILL OCCUR THE NEXT 20-30 YEARS AS PER A FORECAST MADE BY MY IN 2007.

I have a poor record. I work in the private sector, not academia or government so I dont get paid for theories, I get paid when forecasts are correct.I suggest you get out in the field and actually compete before you open your mouth. I have forecasted every day for the past 10 years, with the exception of 1month between jobs. I dont think you have a leg to stand on compared to someone who has to fight the battle every day.

And by the way, Your ignorance shows when you admit that the enso is controlling the global temps. SO how can co2 be responsible if you admit that the nino will raise temps, or the nina drop them. It shows your ignorance to the absolute truth that co2 has nothing to do with this, that as Bill Gray and many before me have opined its the oceans and sun.

My track record?? You are ignorant and arrogant . Here let me clue you in on where the enso will go after this winter
http://www.jamstec.go.jp/frsgc/research/d1/iod/e/seasonal/outlook.html

scroll down to the 2 year nino index, Its a 9 month event on average in the cold pdo, but your ignorance as to that shows in no uncertain terms

Heh. Who knew Joe was lurking? His record is a durn sight better than Jim Hansen's! Actually, temps will have to continually rise during the entire negative phase of the PDO for skeptics to give up, so you have about 15-20 years to get cracking.

Luboš Motl said...
This comment has been removed by the author.
10:38 PM

Joe isn't lurking. He just got the same e-mail announcing selected stupidities on the web and this article made the list.

To drive alarmist loons such as Appell up the wall, most of the people who are at least a little bit relevant have already understood that the weather changes primarily because of the weather, so if it gets warmer due to a new El Nino, it's due to a new El Nino and is just another piece of evidence that the human activity is irrelevant and the alarmists are fucked-up lying Marxist assholes, to put it mildly.

Moreover, you are promising a warming. So far it's been slightly cooling in the last 15-year-long interval and 2012 won't make it into the list of the warmest years, either, despite the likely El Nino.

You need not only to revert the cooling but make it into a warming, and a 3-5 times faster than anything we've seen in any decade so far, and then you may think about having some evidence rooted in the reality.

That won't happen anytime soon. It's much more likely that by Christmas, you will start to look for scapegoats amid the alarmist movement – scapegoat who are responsible for the non-existence of global warming even though all of the loons in the movement would love to see some global warming.

How could it be cooling for the last 15 years at the end of the warmest decade since records began?

Someone is twisting the evidence.

And the Joe Bastardi and Don Easterbrook types just keep braying: "Yes ,but it is JUST ABOUT to start cooling." They have been saying that for 5 years, probably longer.

Gentlemen..no need for all this name calling, surely?
In Northern Europe we are having an appalling summer so the effect of this "weather" will be to reinforce the growing hotbed of scepticism that is Great Britain.
It is a great pity that both sides of the debate seek to use the vagaries of the weather to boost their arguments...but once you politicise a scientific argument, you must expect all the tricks to be used.

Motl:
"So far it's been slightly cooling in the last 15-year-long interval..."

Sorry Motl, it really hasn't. Since the beginning of 1997 UAH shows .13*C of warming, HADCRUT4 shows .13*C as well, GISS has about .2*C, and only RSS has a slightly negative trend. Add to that the fact the oceans have been gaining energy throughout that time and that the ice keeps melting (faster in the Arctic), one has to be really desperate to claim that there has been slight cooling over the last 15 years in the face of the evidence at hand. In steps you.

On that we agree.

If the issue were about the evidence, so-called "skepticism" would have been over a long time ago. If the rest of the year is very warm and next year breaks a record, it will change a few minds temporarily until the next AO causes a cold winter in the USA or parts of Europe (regardless of what the global temps are). It will take a bit longer for "skepticism" to die, simply because it isn't an evidence based position.

Bastardi and Motl are correct. Appell is a know nothing propagandist with no accompanying skill to back up his bullsh!t and guesswork. Time was always going to prove the alarmists wrong, but then again these are the same people that have been offering the exact same political solutions to every "problem" since the 1920's. Almost time for another name change Progressives, your credibility is shot.....AGAIN.

Robert, yes, you're right. (My headline was a bit tongue-in-cheek.)

Anon 12:14 am -- What they mean is, the surface and lower troposphere might be (slightly) cooling for the last 15 years. But they aren't -- the trends are not statistically different from zero. In any case, the surface is a poor indicator of the type of energy imbalance behind AGW (the oceans are much better).

heh. I was looking for a Joe quote to post that would highlight Appellonov's foolishness.....and lo and behold, look who rolled up!

Thanks,Joe, for that righteous @#$%&-slapping.

"Public skepticism could be over, because a big jump in warming could make a big impression on people who don't follow the intricacies of the debate, especially the influence of ENSO."

So now, David, you're hoping that some temporary warming you admit ENSO will generate will convince an ignorant public that the culprit is actually CO2?

Must be hard to look in the mirror. Geez.

"....the alarmists are fucked-up lying Marxist assholes, to put it mildly."

Lubos, one would think the Marxists would have reconsidered their theory after the fall of the Soviet Union. Yet on they march, like zombies escaping the cemetery.

Agenda 21 is quite clear that private property must be abolished. CAGW is the Trojan Horse that will accomplish that. Such a magnificent gift! It deserves a prominent place in the city central square.

A little bird told me that David agrees with Agenda 21 that private property would need to disappear for the transformation needed to combat global warming.

David, what's your take on the functional role of private property?

"Public skepticism could be over, because a big jump in warming could make a big impression on people who don't follow the intricacies of the debate, especially the influence of ENSO."

So your entire point is that warming due to ENSO may scare people into believing in CAGW? Don't you realize this belief will be just as temporary as the positive phase of ENSO and evaporate with the next LaNina?

It would bring the short-term trend back towards (or slightly above) its long-term trend, and it would eliminate the "no warming since 1998" myth/meme. But, yes, the debate will probably (and stupidly) oscillate back again for maybe one or two more La Ninas, which will finally end when cumulative warming gets high enough -- maybe another 1.5 to 2 decades at an underlying trend of 0.14-0.18 C/dec....

So where's all the global warming in the last 15 years, David, and how does that dovetail with CAGW theory?

The warming is very visible in the oceans (Levitus et al 2012). On land it has been hidden recently by two La Ninas (the first very strong), a slightly cooler sun, and possibly air pollution.

Don't come back here until you read:

looks like the "skeptics" are in full panic mode.

As their predicted global cooling fails to unfold and we see temperatures rise much further they will be completely discredited.