Yesterday's Paul Krugman's column said that President Obama has, in fact, reduced government spending, when you account for inflation and population growth.

That seemed surprising, so I checked it out. And it's true. Here is inflation-adjusted, per capita federal government outlays since 1960, plotted annually: 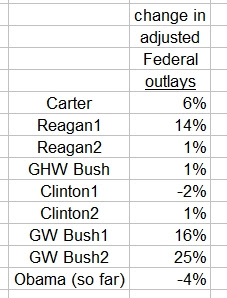 Note only does this dispel the common belief that Obama is a disastrous spendthrift for big government, it also shows was an utter disaster George W Hoover was. (Arguments about the extent to which Presidents or Congress are held responsible for spending are left for the comments. I do think it's clear that, at least in the case of Hoover, his two unfunded wars, two unfunded tax cuts, and an unfunded expansion expansion of Medicare (Part D) are his responsibility, not Congress's.)

I also put together these numbers on change in stock market capitalization (as measured by the Wilshire 5000 index) and total federal debt (click to enlarge): 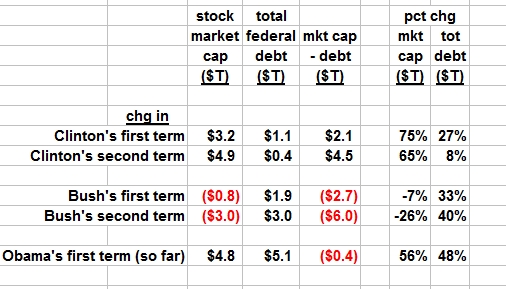 It's tricky because there was a huge uptick in 2008, and these numbers are calculated from the base. If you look at it, Obama has returned spending to the trend line would be a better take.