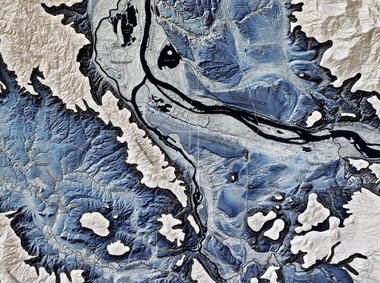 I've been reading Cataclysms on the Columbia, which has a good recounting of the 40-year long fight geologist J. Harlen Bretz had against the mainstream geological community when he proposed his flood hypothesis -- it was a mini-version of the battle royal over plate tectonics. Bretz spent many, many months over many years hoofing all over the eastern Washington Scablands (often with his family in tow -- I wonder what they thought of that), observing and gathering data. Part of the difficulty was that the signs of the flood -- ripples in the land, gravel bars, etc. -- were too big, and really only apparent from the air, a vantage Bretz did not have (this was the 1910s and 1920s). He then had to fight to convince the bigwigs in the US geology community, most of whom had never set foot in the region but were opposed to the general idea of a cataclysmic flood and in favor of more gradual, uniform processes.

Bretz won after a USGS geologist named J.T. Pardee proved the existence of Lake Missoula (which covered today's Missoula, Montana to a depth of 950 feet). Here's a satellite view from Google Maps of an area a few miles north of Perma, Montana that shows what I think are ripple ridges identified by Pardee. The book says they're 20-30 feet high and 200-500 feet apart, "formed by floods at least 800 feet deep plunging across the pass at velocities up to 55 miles per hour."

It's the largest known flood in North America -- it's now thought there were over 40 of them, as ice in northwestern Montana repeatedly blocked the Clark Fork River. The dam formed Lake Missoula, which was about 500 cubic miles (1/3rd larger than Lake Ontario). This satellite view of the hills east of today's Missoula show (I think) shorelines of the ancient Lake.

When the dam broke it let loose an estimated 380 cubic miles of water (3.3 times Lake Erie; 95 times the present volume of Lake Mead), which then picked up 50 cubic miles of sediment on its way through. Portland was under 400 feet of water, and the area where my cats are presently asleep about the same. The total flow is estimated to be 9 mi3/hr (10 Sv), or 1,400 times today's Columbia River discharge at the Pacific, with the leading edge about 500 feet high going at about 50 miles an hour.

For the largest flood, the potential energy released is estimated to be 4,500 MT (megatons TNT), which is 1.9 × 1019 Joules; some comparisons (from the book's appendix) are

It's estimated that rumbling of the a Bretz flood would have started a half-hour before it arrived. Since they occurred between 15,000 and 12,800 years ago it's entirely possible that some Clovis people lived in the area, although since the floods were about 55 years apart it's not clear if the flood plain would have recovered enough between floods to leave the land attractive. Perhaps. That would have been some way to go, if you have to.

--
Thanks to John Fleck for notifying me of the Oregonian article.

One of my favorite geologial events. Very cool, thank you David.