A Good Day for Science in America

No matter how bad your day was, at least there was this: 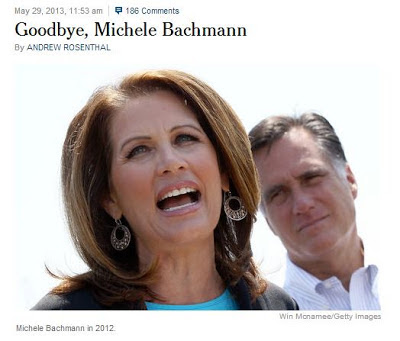 "There are hundreds and hundreds of scientists, many of them holding Nobel Prizes, who believe in intelligent design," she said.

There was the time in 2011 when Bachmann interpreted Hurricane Irene and an earthquake felt along the East Coast as God's warnings to politicians. A year later, as Florida braced for Tropical Storm Isaac, she said, "We are looking at a spiritual hurricane in our land."

And, of course, this?

“I will tell you that I had a mother last night come up to me here in Tampa, Florida, after the debate. She told me that her little daughter took that vaccine that injection and she suffered from mental retardation thereafter.”

Not to mention, this:

Good riddance, Michele Bachmann. You were an embarassement to yourself, but even worse, to America.