Another Movie Gets Climate Change Wrong

Knowing the blogosphere, there will probaby a kerfuffle about the upcoming movie After Earth, or at least some shots at point-scoring.

Debuting June 7th, it stars Will Smith and his son Jaden, who play a father and son who crash land on Earth a thousand years after a diaspora that took place 60 years from now, because the planet had became uninhabitable. But it apparently includes some sketchy science, including about rapid climate shifts. Science magazine writes, this week: 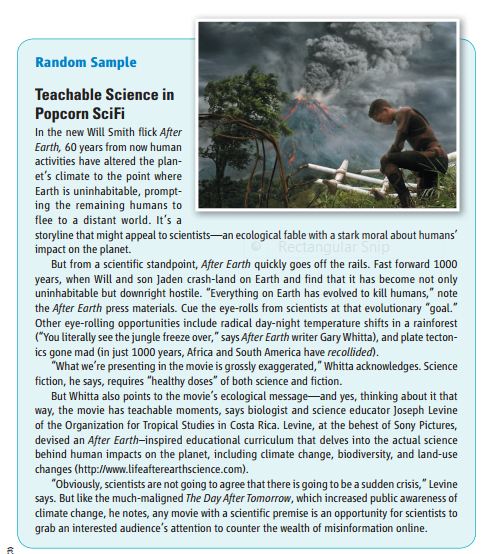 So of the three movies I can think of that somehow involved climate change -- the abysmal The Day After Tomorrow, Waterworld (where somehow the planet contained enough ice that when global warming melted it all, the only land that remained was the tip of Mt. Everest), and now After Earth -- all have seriously perverted the science for the sake of story telling.

Well, Soylent Green mentions the greenhouse effect, but it wasn't central to the plot. I guess.

Maybe someday someone will make a real movie about a realistic scenario that centers around the future with a changed climate. Meanwhile, if you ignore its science, After Earth actually looks pretty good:

How about "The Tsunami After Tommorow"?

David,
Scifi means Science FICTION. Should physicists complain about teleporters in Star Trek? Biologists about the plant life Avatar? Engineers about the flying cars in Blade Runner?......” all have seriously perverted the science for the sake of story telling” that IS science FICTION. You sound just like an intolerant religious zealot.

Even in science fiction you can't just willy nilly change the basic scientific facts -- in fact, usually the more realistic your background science is, the better your scifi is.

Good scifi plays at the edges of science, changing only what it needs (such as faster than light travel) to solve certain technical problems (the inability to explore the galaxy without it). It doesn't alter anything and everything just for the sake of story. Star Trek transporting and Avatar plant life are scientifically plausible occurrences for a far/different future -- they don't violate fundamental laws of physics. Ultra-rapid climate changes does.

Teleporting people " scientifically plausible " LOL. I did think of a couple of movies that were pretty accurate (although timescales off), "A Clockwork Orange" or "1984" BTW I liked the captcha I got "ocerba occupations".

Dave you said that because of Climete Change the temparature would go up by 12 degrees.So if you dont believe it in a Science Fiction post apocalytic CGI touchy feely real life father son bonding (Liberal America getting tired of Obama)Hollywood Blockbuster so why do you believe it real life.