The huge amount of damage done by Hurricane Sandy -- about $75 billion, with 275 deaths along its path -- has been causing scientists to rethink how they classify storms. Now there's a paper out introducing "TIKE" -- Track Integrated Kinetic Energy.

Technically it didn't count as a "major hurricane," a term which the National Hurricane Center reserves for hurricanes that reach maximum sustained 1-minute surface winds of at least 50 m/s (111 mph) -- equivalent of category 3, 4 and 5 on the Saffir-Simpson scale.

Yet its size -- the largest Atlantic hurricane on record (as measured by diameter) certainly contributed to it doing major damage. The size of a storm determines its surge, and for big storms damage from coastal flooding is often larger than wind damage.

with the PDI being the same summation with with velocity cubed.

By contrast, TIKE, as defined by Misra et al,  is calculated by: 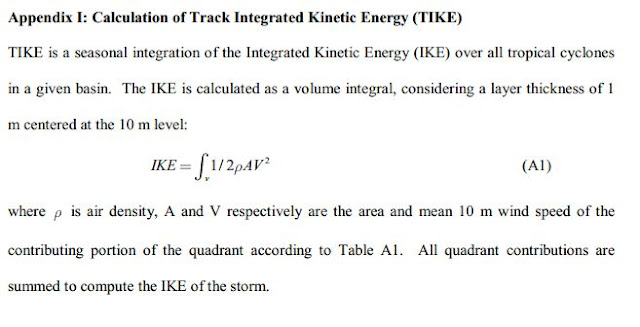 Of course, in practice the integral is going to be a summation, which Misra et al do every 6 hours (as for ACE and PDI), with wind speed and radii data from the Colorado State University Extended Best Track dataset.


According to Misra, Hurricane Sandy had a higher TIKE value than any other tropical storm or hurricane in the North Atlantic Ocean Basin since 1990. Hurricane Lily, which occurred in 1996, was the runner-up, followed by 2010’s Igor, 1995’s Luis, 1997’s Erica, and Hurricane Olga, which occurred in 2001.

They obtain results since 1990: 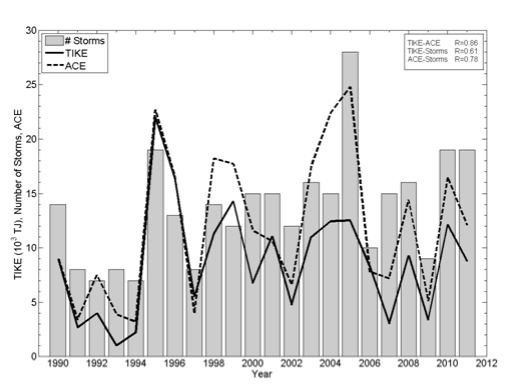 why no mention of the following