What Freeman Dyson Should Have Been Doing All Along 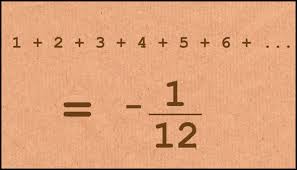 since he first got in trouble for posting it. The same, with much less volume, has happened here, with this and this.

I guess my final position is that I can't honestly say I really understand any of it. By this I mean that

Terence Tao might have had the best explanation of this from the point of view of a real & rigorous mathematician, in a post that for once is mostly understandable.

In the end, and after a couple of good courses in quantum field theory where you learn lots of tricks to deal with calculatons that yield infinite quantities, I think what I understand is that

where ∞1 and ∞2 are some kinds of infinities that physicists have convinced themselved can be subtracted from one another to give -1/12, because doing so somehow gives results that agree with experiment, as with the Casimir force and basically all of quantum field theory since about 1947.

Over the years physicists have actually gotten even trickier about it, and that's what we learned in graduate school. In a technique called "dimensional regularization," they do all their calculations not in 4 dimensions (3 of space and one of time), but in D dimensions. Outside of string theory, they put D = 4 - ε, where as usual in mathematics ε is some tiny number. Eventually they take the limit ε → 0, and get a finite (noninfinite) result. Then they shut up and publish.

Maybe Freeman Dyson might have done more good for the world if he'd spent his time explaining this kind of "renormalization" of quantum field theory than spouting about problems with climate science about which he is wrong.