Yet Another Large Jump in Ocean Warming 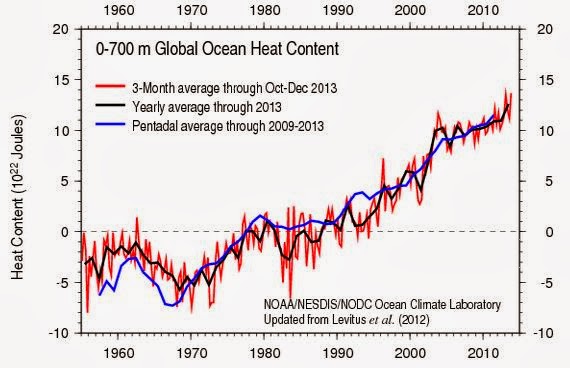 The fourth-quarter result for 0-700 meter ocean heat content is in already, and it shows another large increase from a year earlier.

A better indicator will be, as usual, the 0-2000 m OHC value, compromising the top half of the World Ocean.

Given this, though, it's difficult to understand Judith Curry's recent statement to the Senate EPW Committee that


The stagnation in greenhouse warming observed over the past 15+ years demonstrates that CO2 is not a control knob on climate variability on decadal time scales.

Sure, climate models could do a better job of simulating short-term surface temperatures -- though long-term projections are far more important than short-term projections -- but how does this kind of strong and continued ocean warming happen without a forcing??
Posted by David Appell at 1/20/2014 08:23:00 PM

The most obvious terrestrial component adding heat to the oceans is submarine volcanism. Hard to pour millions of tons of liquid rock into the ocean without heating it. No existing climate model claims to understand this massive heat flow; all of them just assume that it is "constant." And yet - the North Pacific just turned up markedly cold in the last decade, as reported in Nature. Climate spectators (we have no experts) noticed this and said, "Oh - that cold ocean is keeping the atmospheric temperature down." To which others of us ask, "...so, what's cooling the ocean?" And then others, who do not read Nature, say the ocean is warming, not cooling.

Great to see that we're not making any real economic or political commitments based on all this...

Kirk: Please provide an estimate of how "massive" yout claimed heat flow is. I suspect you will find it is not very large at all.

Actually, I doubt your heat flow is much larger than the average heat flow from the Earth's interior, which is about 80 milliWatts per square meter.

But I'll await your calculation....