The Sheep Look Up 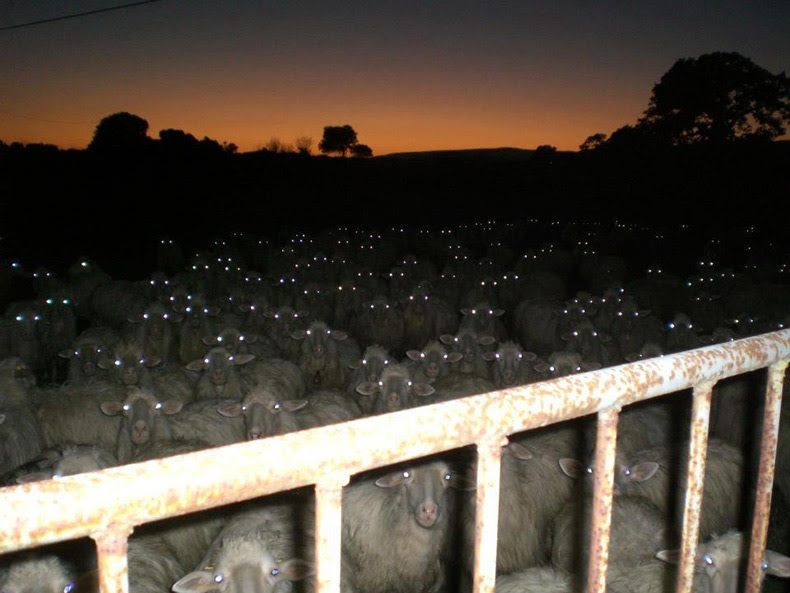 The Weresheep cast from the movie "Black Sheep"

Great photograph, made me laugh, and nice reference to John Brunner.

and they're standing on Zanzibar

Thanks. I originally titled this "A Sea of Eyes," then driving somewhere this morning it suddenly hit me what the perfect title would be.

...
Grey: Well, as I was about to say, it's sort of ironical, because we're already engaged, in a sense, in the course of action my findings dictate.

Page: Don't keep the world on tenterhooks, Tom! Out with it! What's the best thing we can do to ensure a long, happy, healthy future for mankind?

Grey: We can just about restore the balance of the ecology, the biosphere, and so on—in other words we can live within our means instead of on an unrepayable overdraft, as we've been doing for the past half century—if we exterminate the two hundred million most extravagant and wasteful of our species.

Page: Follow that if you can, Mr. President. It's your reward for pre-convicting Austin Train. World, what about lighting him a funeral pyre? Doesn't he deserve—?

THE SMOKE OF THAT GREAT BURNING

Opening the door to the visiting doctor, all set to apologize for the flour on her hands—she had been baking—Mrs. Byrne sniffed. Smoke!

And if she could smell it with her heavy head cold, it must be a tremendous fire!

"We ought to call the brigade!" she exclaimed. "Is it a hayrick?"

"The brigade would have a long way to go," the doctor told her curtly. "It's from America. The wind's blowing that way."

The hungry sheep look up, and are not fed,
But swoln with wind, and the rank mist they draw,
Rot inwardly, and foul contagion spread.

PS, it's only fair to note that Brunner, an unlikely optimist, in fact underestimated the size of the world's problem.

Quoting from
https://davidappell.blogspot.com/2016/11/krugmans-climate-hyperbole.html
the most recent thread here:

" This is such hyperbolic crap. The U.S. could disappear tomorrow and the world would still have a very serious climate problem from its 35 gigatons of carbon emitted. (The US takes this up to about 40 GtC.)"