Things I Saw or Learned at the AGU Meeting

Surprisingly, not one phone went off in any of the sessions or press conferences I attended.

You have to really focus to get something out of the poster sessions, and eventually you're overwhelmed and you go sit off the side and check Twitter. 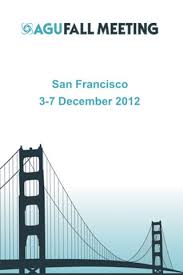 Twitter gives you eyes and ears in sessions you can't attend. Make sure you follow the meeting hashtag (#AGU14), and maybe others.

Scientists like when, as "Press," you ask them relevant technical questions that show you've thought about some of the particulars.

The meeting badge comes with a bright green strip along the bottom sthat says "Press" -- no one can overlook it. You feel a little marked, but you get used to it.

I heard some people complain when they learned there were RFID chips in the badges, but not enough, I suspect, for AGU to undo the policy. (This Moveon.org petition has only 47 signers, which, besides being epsilon of conference attendees, is weird because when I looked at it on Friday it was around 70.)

The iPhone app "Where Am I?" has more detailed, useful maps than Google Maps; but Google Map's public transit information is extremely useful. 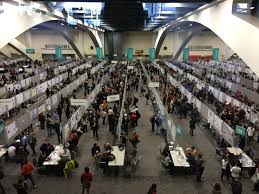 Don't eat all your meals in front of your computer. Or at least try not to.

Make use of the meeting's Virtual Options after the conference ends for stuff you missed and are interested in. You could probably mine that all year.

If you're written an article that includes information from phone interviews, try to find those people if at AGU and show them who you are, especially if you will want to ask them more questions in the future.

I can't even fathom how I ever got anywhere without a smartphone (and that goes double for the Web and Google maps).

When it was raining heavily or I had my luggage, taking a taxi was worth it (about $8 to and fro, compared to $2.25 on the buses and $6 on the streetcars).

If you leave your cats home alone for 6 days, they have a bit of a "Lord of the Flies" look in their eyes when you get back.

I wish I could afford to go to more EGU conferences. (I went to the joint EGU/AGU conference in, I think, 2003 -- it was just a few days after the Iraq War 2 started.) It's a very similar conference and has plenty of good information, but mostly without the American focus. Then afterward you can have some fun running around Europe for a little while. Alas.

If you have N cats and are gone for D days, you need to put out at least ND/4 litter boxes. You will need to clean them out RIGHT AFTER you get home and give your lonely felines some much-missed wet food, then attention.

Put some unique ribbon or band on your luggage's handle, dummy, so you can find it on the baggage claim conveyer belt, or (especially) when someone from the airline gets it via a backdoor and sets it off to the side.

AGU's no picture policy isn't very convenient, but I heard they're unlikely to change it because some pre-publication data and results might be presented at the conference, especially those bound for Science and Nature magazines.

There is going to be a really cool article coming out in Nature Geosciences that will definitely get a lot of attention, but I can't talk about it. Maybe in a month or a few.

Scientists, postdocs, grad students and those who run the conference, babysit the press, provide security and sell food are all very nice people.

I think I read that the AGU recommends you not wear your badge when you're out of the Moscone Center.

There was no net melting (change in ice mass balance) in Greenland this year (compared to 2013).

It is enjoyable to be in a place where no one doubts the existence of the greenhouse effect or that the planet is warming. I need to pay less attention to deniers.

I'll put up a separate post about a result on albedo change in the Arctic sea and what its effective radiative forcing is compared to CO2's. It kinda floored me.

I didn't notice any presentations from prominent, legitimate contrarians, which is really too bad, because if they have results they believe in and think are important, they should present them instead of shying away from the conference. Maybe they got burned too many times.

There are a lot of amazing data being collected from satellites and being used in all kind of interesting ways you never thought of (like calculating groundwater depletion). You can see the day when all this data will be available in real time and archived, with pretty software to led anyone slice and dice everything. Eventually this vast network of satellites and sensors and servers will become self-aware, like SkyNet in the Terminator movies. (My guess is that the very first thing any self aware, omnipotent, intelligent entity does is shut down all the coal plants.)

Book your room and flight as soon as you're able, especially if you're taking advantage of conference discounts. (Like, do it in the first hour after you're notified of deals.)

Use the meeting app or make a spreadsheet of what you want to attend by the hour, or something, because trying to decide on the fly can mess up your day.

There is a huge amount you will miss. That's just he way it is. Keeping checking Twitter.

Everyone goes to the sessions with big-name  speakers, but the people presenting the hard most recent and undercovered (if covered at all) are very often postdocs or advanced graduate students or very young professors -- those with pasty skin who effectively live at their department. Such sessoins are down way at the end of the hall around a corner in sessions that start at 5:30 pm or 6:30 am not enough people attend (including me).

There can never be too much WiFi.

If you're a journalist, try not to attend too many press conferences, if you can. Pick them judiciously. If you do go, go up afterwards and ask more questions or just listen to others asking them, because that's often when scientists, feeling the performance pressure gone, lighten up and say the most interesting and useful things.

"Scientists like when, as "Press," you ask them relevant technical questions that show you've thought about some of the particulars."

Given that most science reporting is awfully inaccurate, I guess they are pleasantly surprised to be able to talk to someone knowledgeable. There was a time when I was considering becoming a science journalist and one journalist tried to convince scientists not do do so because former scientists would write horrible prose. Well I personally prefer accurate horrible prose over beautifully written mistakes, at least when it comes to science. The culture section of the newspaper should naturally be a pleasure to read as well.

"AGU's no picture policy isn't very convenient, but I heard they're unlikely to change it because some pre-publication data and results might be presented at the conference, especially those bound for Science and Nature magazines."

It would be great if we could let the authors decide what they want. In both directions.

"There is going to be a really cool article coming out in Nature Geosciences that will definitely get a lot of attention, but I can't talk about it."

Damn, somebody already wrote my article. :-)

"There can never be too much WiFi."

At this years general meeting of the European Meteorological Society, there was no free WiFi in the meeting rooms, just outside in a working room. I really liked it, people were paying attention to the presentations again, like they still used to do a few years ago, being fully immersed in the science and the conference, rather than answer their email as if they are at home and only being there with half an ear.

Victor, you would have made a great science journalist. You know your stuff, and your blog and tweets show you are obviously a good communicator with your own point of view who writes interesting things.....

I didn't see it, but Michaels and Knappenberger had a poster.

Pictures optional would be nice, but if is one way or the other, I think the current version is OK - these things are often works in progress. Lots of us put posters up as e-posters anyway.

The main solution needed is the ability to clone oneself a few times.

David, thank you. :) Be careful what you wish for, let's see what I will do when Project Science no longer tolerates me. I would at least need a good editor. ;)

John Mashey, Stickmanscorral has a post up on the M&K poster.

Neat post! Sad to have missed out on this year's fun science.