CO2, Ozone and the Xindi Aquatics

Once again I came across a claim like this one on Roy Spencer's blog:


"CO 2 is a trace gas in the atmosphere and insignificant by definition."

Of course that's false -- without atmospheric CO2 the Earth's surface would be below the freezing point of water -- but I thought I would compare it to ozone, also a "trace gas."

Atmospheric ozone helps blocks strong ultraviolet light (UV-C) and most of UV-B, which would kill most animals who live on land. (I guess it might depend on how thick their skin is. And turtles? Snails?) Life might never have developed past the stage where the first ocean animal crawled out onto land, whoever's brilliant idea that was.

Wikipedia says atmospheric ozone's concentration is 0.6 ppm, 700 times less than CO2's. But what is its concentration in the "ozone layer?" I couldn't resist a little calculation to figure it out. 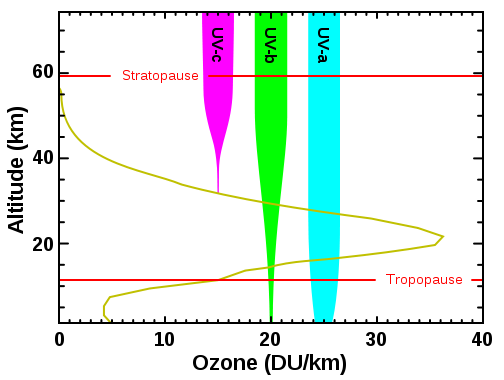 DU is "Dobson unit" -- "One Dobson unit refers to a layer of gas that would be 10 µm thick under standard temperature and pressure."

What is the density of air at that altitude? 0.088 kg/m3, according to this handy Standard Atmosphere Calculator. Dry air has a molecular weight of 28.97 grams per mole, so the mass of one air molecule is 4.8×10-26 kg.

Dividing one molecule number by the other finds that ozone's concentration at that altitude is 5.3×10-6, or 5 ppmv.

So ozone's maximum concentration is about 80 times less than CO2, and without this "trace gas" we'd be dead. Or never have existed in the first place, unless it developed underground or quickly developed some extremely strong sunscreen lotion.

As Shakespeare wrote, "the dose makes the poison." It's not the amount of something you have, it's its effect that kills you.

---
After doing this calculation I found this in Wikipedia: 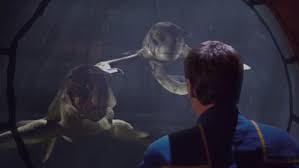 Aside: If animals never left the ocean, could a technological civilization ever have developed? What might intelligent aquatic species like dolphins and octopi evolve into in another billion years? There were are the Xindi-Aquatics on Star Trek Enterprise, who seemed to have ships of their own, filled with water (and a small room for communication with nonaquatics). How could all that technology have developed in a water environment? How would you develop electronics? Or what would replace electronics if you couldn't escape the water -- maybe some kind of machines that worked by some kind of pumps pushing water...somewhere.
Posted by David Appell at 5/08/2015 10:13:00 PM

Spencer, on his blog, notes that he is ("Principal Research Scientist at the University of Alabama in Huntsville.” There are three posts below on this blog dealing with some strange reassessment of temperature data at UAH. May be assume the two UAH’s are the same but that the good Dr Spencer is NOT messing with data a bit?

John, it's that UAH's version 6 is in "beta," meaning they are still preliminary and subject to change. One error was found the day the data were released -- they didn't average to zero over UAH's chosen baseline, as anomalies should. They fixed that easily so all the data shifted, hence the quick change. They're now in "v6.0beta2", the 2nd preliminary version after v6.0beta0 and v6.0beta1.

It might seem like rushing the data out, but I can see the value in asking for more eyeblls to look it over. This guy thinks he has some bigger problems:

What does "RSS" stand for?

John, RSS is "Remote Sensing Systems," a private company that sells satellite imaging observations and which, like UAH, is also funded to measure the temperatures of the lower troposphere and other regions of the atmosphere.

They have been notable recently because their warming trends were significantly below UAH's trends, but with UAH's version 6 data, the trends are much more similar.

An aquatic species would never master the use of fire, and would not be able to forge metals. They'd have to forgo everything that follows from this, not having the tools to make the tools that would allow them to produce water-free workshops for metallurgy etc.
I think that even turtles and snails would have a hard time without ozone's UV-blocking effect - they don't get much done when they're just sitting in their shells. And turtles, at least, would have to worry about cataracts - the vertebrate cornea can't take a lot of UV.

On the pressing issue of aquatic exocivilizations, they could do high-temperature chemistry and metallurgy at ocean hydrothermal and volcanic vents. They could either construct workbenches at the surface or capture air underwater for work that needs to be done in dry conditions.

Even if it's more difficult, just add another 10-100 million years for them to work through the problem. That's a drop in the bucket of time.

Interesting/related question of how soon in human history did we do work that requires a vacuum - we were able to do it without being able to live in a vacuum.

Yes, they could, but this would require a very large number of widely-distributed hot vents if they were to support anything like a metal-based civilization - even something like a Bronze Age. How likely is that? And then they'd have to bootstrap themselves into more advanced technologies somehow, with the materials to make the necessary tools limited by their access to natural benthic heat sources. I think that this would be the really limiting consideration - unless their ocean bottom is a hodge-podge of vulcanism, getting any sort of metal-based technology off the ground would be very difficult.
Also difficult to see how you'd establish a solution-based chemistry when you're living in, basically, a solution.
Still, maybe you're right, with enough time they'd eventually tip over a threshold.