GISS Anomaly Estimate for May: A Record High

From the month's U Maine reanalysis data, I estimate GISS's global anomaly for May will be +0.83°C.

That'd be a record-high for the month, smashing last year's record of +0.77°C, and the 6th-warmest of any month since GISS's records began in 1880.

My estimate last month for April (0.66°C) wasn't very close to the actual value (0.75 0.71°C), and but the relationship between the estimate from reanalysis data and the actual GISS anomaly isn't a strict linear fit: 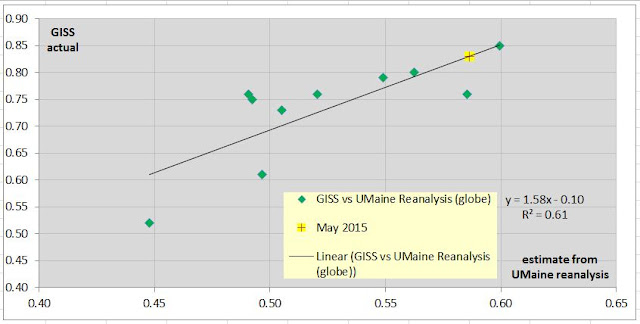 so don't take my number to the bank.

Nota bene: Turns out GISS corrected their numbers a few days after they first came out (May 15th), which I didn't catch, which explains why I had some incorrect some numbers above. Their new numbers don't change my estimate for May.
Posted by David Appell at 5/31/2015 07:36:00 AM

I thought the April anomaly was 0.71°C - that's still what's showing on the GISTEMP site and it doesn't appear, looking at my records, as though there was a big adjustment in the temperatures for Aprils past in the last update there. Am I missing something or is that 0.75°C just a typo?

Jon, you're right, thanks.

Turns out there was a problem, and GISS published corrected data on May 15:

"May 15, 2015: Due to an oversight several Antarctic stations were excluded from the analysis on May 13, 2015. The analysis was repeated today after including those stations."

Turns out the newer data doesn't change my estimate for GISS's May anomaly.