Plants: Not Getting the (Simplistic) Message on CO2

It seems that some plants aren't getting the message that they're supposed to be thriving in a higher-CO2 world.

A recent study (open access) of grasslands in a Montana meadow found that productivity decreased 50% in 40 years (1969-2012), despite a 21% increase in atmospheric CO2.

Why? Because natural plants don't live in a tidy little greenhouse, where the CO2, temperature and precipitation aren't precisely controlled. From the paper in Nature Communications, by Brookshire and Weaver:

ANPP = above-ground net primary production. "Production" means how much plant mass is created from photosynthesis, measured in this paper in grams per square meter per year. "Primary" refers to plants, who fix carbon, as opposed to the secondary production of heterotrophs, who can't fix carbon and gain energy by eating other things. (So you're a heterotroph.)

Here's the measured decline in primary productivity in this Montana meadow (click to enlarge): 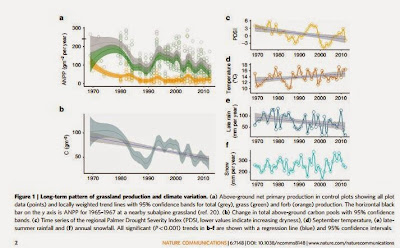 The Daily Climate has a nice article on this (click to enlarge). From it:

This is in-line with several papers I've seen that show CO2 isn't an unalloyed good when it comes to plants -- "Carbon dioxide, we call it life" claim is grossly simplistic, because plants must also content with temperature changes, precipitation changes, and more.

Some of these studies:

You included a couple of papers by Lobell, but missed the cleverly-titled "Getting caught with our plants down: the risks of a global crop yield slowdown from climate trends in the next two decades".