El Nino on the Rise

El Nino is kicking into a higher gear, though not as fast as recent El Ninos at this point in the year: 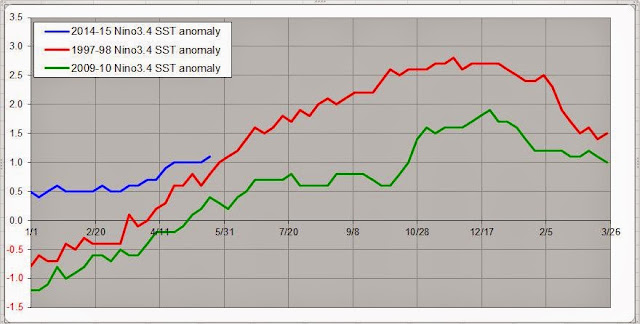 Here's the historical record of the Nino 3.4 index, which is the temperature anomaly in a region in the equatorial Pacific Ocean where El Ninos take place. El Ninos are in red, though not all the red areas are El Ninos -- the Nino3.4 index needs to be above 0.5 for five consecutive months for an El Nino to be declared (though that's not a universal criterion, I think):

That's from the International Research Institute for Climate and Society at Columbia University. Here's their collection of forecasts for the Nino3.4 Index: