The Pause is Ending

The Pause (seepage or not; real or not) looks to be ending. Here is the amount of warming in the previous 10 years (120 months), according to NASA GISS: 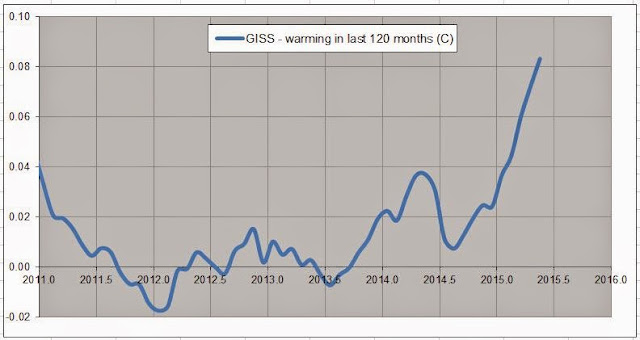 Of course, that's a sizeable if. But, with the El Nino, it's not clear the remaining months won't be higher than those so far.

--
PS: Labeling this "numerology" gets me out of calculating error bars, statistical signficance, and all that. Just like 99.8%* of all blog posts.

* This number is also numerological -- I guessed. See how easy this is?

WUWT and Spencer say.07 anomaly. Assuming the base range is different, but still seems like a big discrepancy

The graph appears to show 4 years of data, not 10?

@Harry - DA was a bit thrifty with his description of what he did. What he means is that the rightmost data point in the graph, for April 2015, is determined by the 120 months of data from May 2005 through April 2015 and similarly for the earlier parts of the graph. Presumably what's shown is the trend based on ordinary least squares over each 120 month period, with some kind of polynomial smoothing .