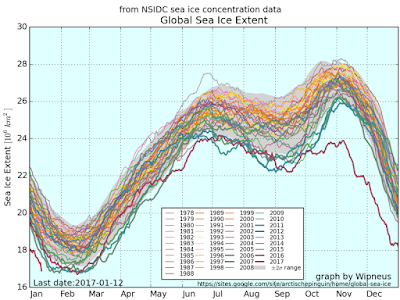 Or maybe this is what a tipping point looks like. (But someone told me several months ago that he thought the Arctic had already passed a tipping point.)

Here's a radial graph of Antarctic, Arctic, and total sea ice, which I think is a good way to view this: https://scratch.mit.edu/projects/embed/139072677/

Regarding the drop in Antarctic SIE being noise rather than signal, JoeT had an interesting point in an earlier thread that "decrease in Antarctic sea ice extent was pretty much expected by Meehl and co-workers due to the change in sign of the IPO."

Time will tell I suppose.