Here's an excerpt from last night's court decision in Pennsylvania, where the Trump campaign filed to block the certification of Pennsylvania’s election results, alleging "that Republicans had been illegally disadvantaged because some counties allowed voters to fix errors on their mail ballots" [WaPo]. The federal judge didn't hold back in ruling against them, citing no evidence: 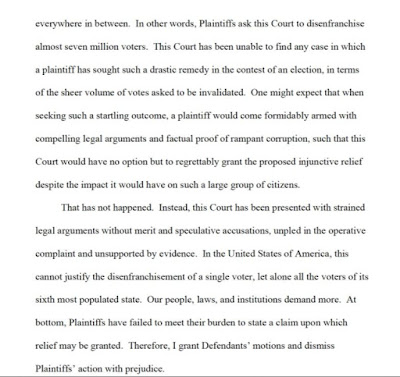 Giuliani and Jenna Ellis said they would appeal and expect the case to reach the Supreme Court. There's no guarantee SCOTUS would agree to hear the case. Maybe Hugo Chávez will show up in support of the plaintiffs.

What I meant was that Sidney Powell, on Trump's team of lawyers last week, claimed that software fraud in the Dominion voting systems used in some US states in this election was originally written for Hugo Chavez when he wanted to swing some votes on constitutional issues in Venezuela. Maybe not the best of jokes, but that's what I was aiming for.

Right, I understand. FYI Chávez didn't swing and didn't want to swing that referendum (neither Maduro the subsequent ones), and all these allegations were pure, grade A bullshot. Now you can get a glimpse of it in the US, how it feels when powerful forces with considerable propaganda power claim fraud without any justification.