Trump is Too Disgraceful, Undemocratic to Continue to Lead the U.S.

With his appearance early Wednesday morning, and this tweet, Trump is acting as no American president ever has, as far as I know, and profoundly anti-democratic: 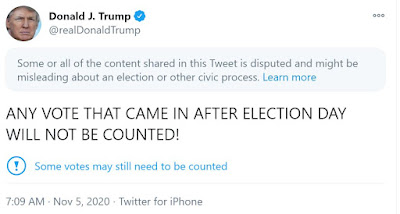 “We have claimed, for Electoral Vote purposes, the Commonwealth of Pennsylvania (which won’t allow legal observers) the State of Georgia, and the State of North Carolina, each one of which has a Big Trump lead,” Trump tweeted Wednesday.

That's what despots do. It another reason why Trump absolutely has to go.

Today Biden will probably get to 270 votes by winning Arizona and Nevada and win the stupid Electoral College. [Fox News called Arizona for Biden on Tuesday night, but so far no one else has, AFAIK.] But that leaves too much room for Trump to attempt a coup. So hopefully Biden gets to around 290 electoral votes by winning Pennsylvania and Georgia and he can tell (politely, of course -- Biden is always polite) Trump to shove it go pound sand.

Still plenty of entertainment value to be squeezed from this election.

From the BBC coverage I note that in marginal states where Trump is ahead, the Republican demonstrators are chanting "Stop the count".

Where Trump is behind, the Republicans are changing "Count every vote".