Now here's absolutely breathtaking evidence of fraud by climate scientists by someone named Ron House -- climate scientists must have committed fraud, because just as the daily graph of 2010 sea ice extent was approaching the "normal" line, it turned away and went downward! No other proof needed! 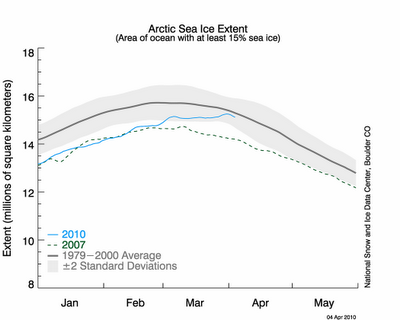 
As someone with expertise in computer science, I cannot see any way this can be an outcome of an automated algorithm of any reasonable design.

Of course, it couldn't simply be... that this was what the actual data showed! No, someone has to be lying to him.

Sometimes I lament the invention of the Internet. There is so much just play shitty information going around, like House's, that truth and decency no longer has any meaning. And it could conceivably affect the existence of mankind, if enough people believe this kind of thing.

Personally, I'd like to see the NSIDC sue House for libel. I'd like to see any climate scientist sue the next yahoo who calls them a liar or fraud or worse. That would be interesting, and long overdue.

Actually, who the F is Ron House? Why does his moron opinion matter enough to sue? Why not point out he is a moron and move on?

The WSJ's Bret Stephens today, a contest as to what panic will replace global warming

Something is going to have to take its place.

The world is now several decades into the era of environmental panic. The subject of the panic changes every few years, but the basic ingredients tend to remain fairly constant. A trend, a hypothesis, an invention or a discovery disturbs the sense of global equilibrium. Often the agent of distress is undetectable to the senses, like a malign spirit. A villain—invariably corporate and right-wing—is identified.

Then money begins to flow toward grant-seeking institutions and bureaucracies, which have an interest in raising the level of alarm. Environmentalists counsel their version of virtue, typically some quasi-totalitarian demands on the pattern of human behavior. Politicians assemble expert panels and propose sweeping and expensive legislation. Eventually, the problem vanishes. Few people stop to consider that perhaps it wasn't such a crisis in the first place.

link may be subscriber locked, if so google a bit of the text to bypass it.

Anyway the public has gotten onto the sociology of discoverers now.

That's a brilll-yunt essay by Stephens, if you ignore the false premises, strawmen, and blatant mischaracterizations of fact. F'n devastating if you ignore all that.