The Japanese satellite IJIS has it peaking yesterday -- though, of course, this might well change in the next few days. The National Snow and Ice Data Center (NSIDC) in Boulder has it still going up as of latest data: 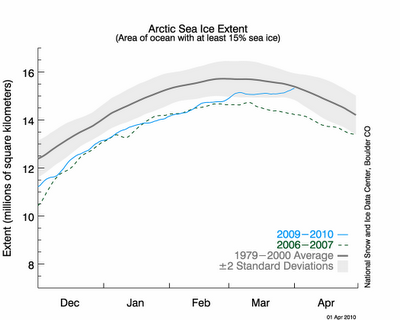 If the world is so warm, how can this be?

Of course, you have to look at the details, something Clingons prefer not to do. I asked Julienne Stroeve, a researcher at NSIDC who specializes in just this area:


Yes the extent has peaked up, mostly driven by increases in the Bering Sea related to winds pushing the ice out in that region and also cold temperatures. Elsewhere in the Arctic it has been unseasonably warm.

Although the winter ice extent is now around normal, I wouldn't make too much of it. The trends in the winter ice cover have been small and we would expect them to be because temperatures in winter will still be cold enough for a long time to come to form ice. The main issue that should be looked at (which the extent doesn't show), is how thick the ice is. We know this year we have even less of the oldest and thickest ice than we've had during the satellite data record, so the overall 'volume' of the Arctic ice pack is still likely anomalously low.

Places like the Bering Sea are seasonally ice covered and melt out every summer, so more ice there than normal this winter doesn't have much impact on the summer ice cover.

So, once again we need to emphasize that "extent" is not "volume," and it's the latter that is really important, and that global conditions are not local conditions.

Dr Stroeve says they will be writing about this in their April 6th update.