UAH's computer is no doubt crunching the numbers right now, but the nifty daily graph available from Roy Spencer shows that March was also a record warm month: 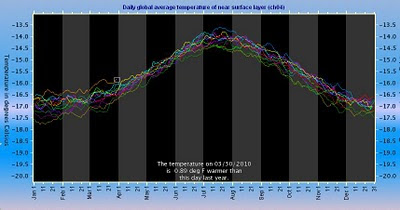 (Click to enlarge.)
March 2010 (the top, orangish line here) is significantly above any month back to (and including) 1998. In fact, every day in March set a daily record. The same was also true in February 2010, and in the last half of January.

Disclaimer: Global warming is, of course, just a myth propagated by liars, thieves, and goat fuckers. Pay no attention to the actual data, which is secretly and shamelessly altered daily by the top scientists in the world. (Changing "2s" to "8s" is their favorite ploy. Changing them to "9s" would, of course, be too suspicious. Don't worry, these guys know what they're doing.)
Posted by David Appell at 4/01/2010 08:20:00 AM

Cherry-picking to get the result they want is the charge.

You can't tell a long cycle from a trend with a time interval short relative to the cycle you wish to exclude, no matter how good your data is.

That's because the noise gain grows exponentially large when you try.

The hockey stick bypassed that by not being a possible cycle.

Since the demise of the hockey stick owing to that cherry picking, it's back to basics.

You can't tell a trend from a cycle, and a cycle obviously can't be man-caused.

So the correct conclusion is that nobody knows, which is the state we were in before all this started.

The question might come up why the alarm started. I'd suggest it was attracted by funding.

Alarms, like computer models, grow in the direction of funding.

> You can't tell a long cycle from a > trend with a time interval short
> relative to the cycle you wish to
> exclude, no matter how good your
> data is.

I never said it could. I was reporting a 1-month result.

The rest of your comment is, as usual, gibberish. Bullshit mocked up to appear intelligent. I wonder how many of your vast and bold insights have been submitted to the scientific literature, and why you're afraid to sign your posts with your real name.

R.H.Hardin is my real bonafide name.

You can google it.