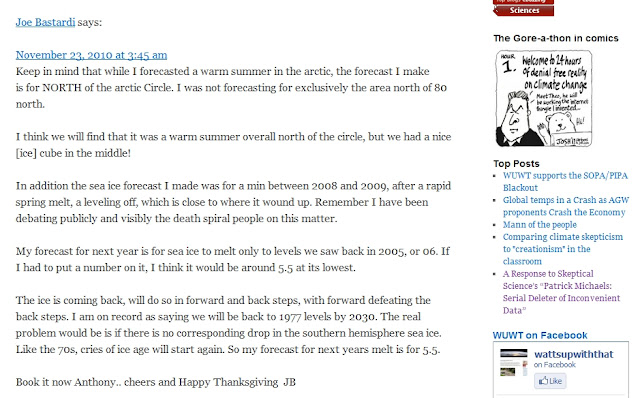 So how did he do? Guess.

Bastardi concluded with "The ice is coming back, will do so in forward and back steps, with forward defeating the back steps."

For more such Bastardiness, see today's WUWT, where Joe thinks CO2 can't mix in the atmosphere because it has a higher molecular weight than air.


Nor am I going to question them as to why they believe a trace gas like CO2 (needed for life on the planet) with a specific gravity of 1.5 as compared to the atmospheres 1.0, was going to mix with air in a way to affect the earth’s temperatures.

If CO2 didn't mix and instead hung around close to the ground basements would be very dangerous places as the co2 would accumulate down there and displace the lighter oxygen.

The CO2 bit is great, tahnks for the tip: http://scienceblogs.com/stoat/2012/01/aiiee_the_stupid_it_burns.php

This is a weak rehash of a denial meme from maybe a decade ago, when they were desperate to confuse by casting doubt on anything and everything they could think of. I think that past period is why you see some folks make the phrase 'well-mixed gases' prominent and frequent. Can't seem to find an example of the silliness with a quick Google.

Exactly, Dan. CO2 causes drowsiness at about 5000 ppm, and starts to get dangerous around 10000 ppm.

Maybe our elevated CO2 level is already causing drowsiness, and that's why so few people seem to give a damn.

The grain of truth upon which this crap is based is the tendency in non-turbulent conditions for a release of a sufficiently heavy gas to stick around at ground level for a while, as with the famous volcanic CO2 asphyxiation incident some years back in Cameroon.

But of course one can stand at the bottom of Death Valley and not become even slightly short of breath due to excess CO2 (indeed the opposite, if anything, since O2 density is higher).