There's a new paper just out in Nature Geosciences that seems important: it says there is no "missing energy" in the climate system after all, and that the Earth continues to accumulate energy [as expected with AGW]. Here's the abstract:


Global climate change results from a small yet persistent imbalance between the amount of sunlight absorbed by Earth and the thermal radiation emitted back to space. An apparent inconsistency has been diagnosed between interannual variations in the net radiation imbalance inferred from satellite measurements and upper-ocean heating rate from in situ measurements, and this inconsistency has been interpreted as ‘missing energy’ in the system. Here we present a revised analysis of net radiation at the top of the atmosphere from satellite data, and we estimate ocean heat content, based on three independent sources. We find that the difference between the heat balance at the top of the atmosphere and upper-ocean heat content change is not statistically significant when accounting for observational uncertainties in ocean measurements, given transitions in instrumentation and sampling. Furthermore, variability in Earth’s energy imbalance relating to El Niño-Southern Oscillation is found to be consistent within observational uncertainties among the satellite measurements, a reanalysis model simulation and one of the ocean heat content records. We combine satellite data with ocean measurements to depths of 1,800 m, and show that between January 2001 and December 2010, Earth has been steadily accumulating energy at a rate of 0.50 ± 0.43 W/m2 (uncertainties at the 90% confidence level). We conclude that energy storage is continuing to increase in the sub-surface ocean.

Granted, that is a rather large uncertainty. (But hey, this is a really difficult analysis.) ENSO plays a large part in the radiation budgeting: 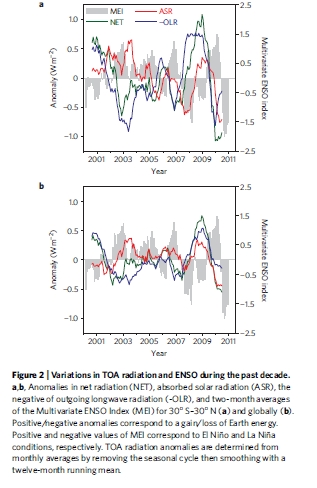