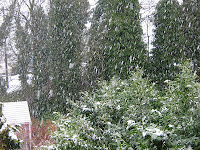 It's been miserably wet here this week -- snow (about 8"), rain, melting, more rain, and then, still more rain, and now flooding. I noticed moss has been growing around the edges of my car windows. They don't really try to plow the side streets here, but luckily I didn't need to go anywhere. It's easy to understand why Lewis & Clark and their men were completely miserable in the winter they spent on the mouth of the Columbia River in 1805. They were there for 105 days -- only 12 of them were without rain, and there were only 6 days of sunshine.


"...the men suffered from colds, influenza, rheumatism, and other ailments that the captains treated. Clothing rotted, and fleas infested the blankets and hides of the bedding to such a degree that a full night’s sleep was often impossible."

They left to head back east 8 days before they had planned to. Whatever the pioneer equivalent of "fuck this shit" was, I'm sure it was said when they finally decided to bail.

Anyway, John Fleck told me about this nifty NOAA site that shows river conditions in the Pacific NW. Next to my town, the Columbia River has risen about 5 feet in 3 days and is forecast to rise another 3 ft before peaking.

Oliver doesn't seem to mind cold or wet or snow or rain -- he goes out no matter what the weather. Lately he has found a way onto the crest of the roof, where he sits and meows loudly at the neighborhood.

But Sophie is particular and has spent the last three days in one spot, except to get up to eat or go the box. I've had to work at the kitchen table. 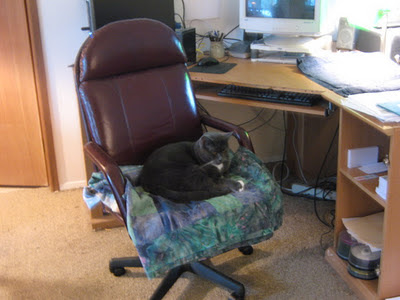