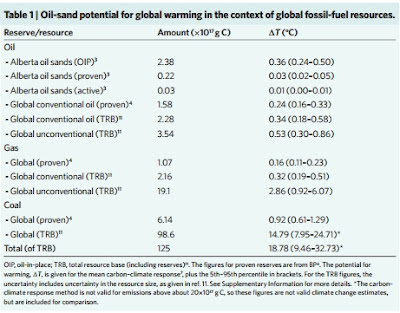 A paper just out in Nature Climate Change finds that the climate cost of exploiting the Alberta tar sands is very slight: +0.03°C.

Neil Swart and Andrew Weaver added up the carbon in the oil sands -- total (1.8 trillion barrels), the economically viable "proven reserves" (170 Bb), and the amount currently under active development (26 Bb).

They then simply applied a carbon-climate response of 1.5°C per trillion metric tonnes of carbon burned. The result is the chart shown to the right. (The response function is, they write, observationally constrained to be between 1.0 - 2.1°C.)

That's less than I calculated last month, but then, I was being somewhat loose with my numbers, and the carbon-climate response I assumed was equivalent to 2°C/TtC.

It's difficult to argue that an extra 0.03°C of warming will be catastrophic, whatever future warming is. It won't even be noticeable. They didn't add any tar sands premium -- extra greenhouse gases from the tar sand-based oil itself, and the extra energy needed to extra the tar sands, compared to conventional oil, which is something like 20% -- that would make the temperature change +0.04°C instead. Meanwhile those proven reserves are worth about $17 trillion at today's prices -- one-fourth of world GDP; ten times Canadian GDP. I don't know how much of this money Canada will actually retain -- a CBC program I watched recently suggested it may be as low as $1/barrel. Still, $170 B is nothing to scoff at. And, of course, the world still runs on oil, and that's simply not going to change anytime soon.

Climate, of course, isn't the only consideration regarding the Keystone XL pipeline, and maybe not even the prime consideration. But it has been a used as an argument to stop building the pipeline. That simply isn't credible. (Though Bill McKibben recently told Joe Nocera, "Keystone, by itself, won't make or break the environment.")

Of course, that's the problem with all such considerations as this -- individually any additional carbon emitted looks very small, if not infinitesimal -- but collectively it all adds up, over decades, to an enormous impact. Humans have never been good at dealing with these kind of issues, either in our personal lives (it's only one doughnut) or collectively.

So I would say: Joe Nocera beats Joe Romm.

I don't have access to the paper right now, but is there any particular reason to look at only proven reserves and ignore OIP? My limited understanding is that proven reserves are not a ceiling, at least with a relatively undeveloped resource.

Well a half degree is more money that everyone else must spend on adaptation while a few reap their profit. And don't forget the sheer number of ha being ruined and lost habitat and direct shooting of top predators for profit.

I've not looked at this paper yet either, but aren't there "different" rules for what constitutes "proven" reserves for oil sands versus conventional?

I seem to recall that for oil sands the criteria is something like "will be extracted within the next 5 years". But - and again, this is just what I thought I understood - it's pretty apparent that "all" you need to do expand that resource dramatically is just go after it. Granted, these are mega-projects, but the economics and risk is pretty well understood and it's clear that a LOT more can be brought into "proven".

I think this criteria makes an apple to apple comparison with conventional "proven" a stretch, and likely that we need to consider a lot larger number than the line item for 0.22 * 10^17 g C and 0.03 degrees C.

Bwtfdik. Will read the paper. Hard to imagine that Weaver and Swart don't discuss this...

The paper uses the official figures for OIP versus "proven reserve" and "under active development" from the Alberta ERCB report:

Also, very similar results are obtained by doing this with an earth system model, see figure second from bottom here:

So are you really on-board with this brain-dead garbage from Nocera?:

"Maybe — just maybe — stopping the Keystone pipeline would be worth it if it really was going to change our behavior and help usher in the age of renewable energy. It would, indeed, be worth turning our backs on oil that we badly need and that is already making our country more secure and prosperous.

"But let’s be honest. It’s not going to change anyone’s behavior. If Keystone is ultimately blocked, the far more likely result is that everyone who opposed it will get to feel good about themselves while still commuting to work, alone, in their S.U.V.’s."

The problem, as should be obvious, is that this logic can be applied to *every* source.

Arguments over the exact amount of future recoverable oil aside, Andy Weaver, in contrast, seems to think we need to stop now, beginning with the tar sands:

"If North American and international policymakers wish to limit global warming to less than 2 °C they will clearly need to put in place measures that ensure a rapid transition of global energy systems to non-greenhouse-gas-emitting sources, while avoiding commitments to new infrastructure supporting dependence on fossil fuels."