Via John Fleck I learned about this new blog, All Models Are Wrong, by climate scientist Tamsin Edwards, who does research in quantifying the uncertainty in models of earth systems. A really important subject. As John notes, there was a fascinating discussion there about the name of her blog, and it was disturbing as well.

Via Twitter, Edwards asked for thoughts on her blog's name (which comes from the looks-like-he-would-be-fun-to-hang-out-with statistician George Box who said, "All models are wrong, but some are useful.") Her query triggered this response from Peter Gleick:


@PeterGleick: @flimsin Title is serious error.Buys into “everything is uncertain” meme.And argument that politicians don’t hear about uncertainties is BS.

That was followed by a tweet from Bob Ward and than another from Peter Gleick:

Tasmin defended herself very well, and Richard Betts helped her. But I am gobsmacked about Gleick's reaction. It sharply summarizes everything that is wrong with climate activism, as well as about "framing." Framing, which is what Gleick is advocating here, is really just a sophisticated form of lying, where by "lying" I include not telling the full truth. Telling the full truth is precisely why science has been so successful over the last four centuries -- by far the most successful philosophy ever invented, whether "success" means material success or epistemological success or even (perhaps) spiritual success. You tinker with that are your peril.

Besides, it's precisely by the never-ending process of reducing uncertainty and eliminating discrepancies that science makes progress. If Joe Public or John Politician doesn't know that, it's time they learned.

At the same time, keep pointing out that science is not, and will never be, the complete arbiter of the solution to the climate problem. Please take your Hulme from your nightstand and turn with me to page 107, where it is written,


"...we must be more honest and transparent about what science can tell us and what it can't. We should not hide behind science when difficult ethical choices are called for. We must not always defer to 'science' or to the 'voices of scientists' when we need to make decisions about what to do. These are decisions that in relation to climate change will always entail judgements beyond the reach of science."

Because there still are a lot of uncertainties, whether Peter Gleick wants to talk about them or not.


"...Climate sensitivity, the eventual global temperature change per unit forcing, is known with good accuracy from Earth's paleoclimate history. However, two fundamental uncertainties limit our ability to predict global temperature change on decadal time scales.
“First, although climate forcing by human-made greenhouse gases (GHGs) is known accurately, climate forcing caused by changing human-made aerosols is practically unmeasured. Aerosols are fine particles suspended in the air, such as dust, sulfates, and black soot.... Aerosol climate forcing is complex, because aerosols both reflect solar radiation to space (a cooling effect) and absorb solar radiation (a warming effect). In addition, atmospheric aerosols can alter cloud cover and cloud properties. Therefore, precise composition-specific measurements of aerosols and their effects on clouds are needed to assess the aerosol role in climate change.
“Second, the rate at which Earth's surface temperature approaches a new equilibrium in response to a climate forcing depends on how efficiently heat perturbations are mixed into the deeper ocean. Ocean mixing is complex and not necessarily simulated well by climate models. Empirical data on ocean heat uptake are improving rapidly, but still suffer limitations.”

Heck, modelers don't even know if clouds contribute a net cooling or a net warming -- present models find a cloud forcing anywhere from -30% of GHGs to +90%. 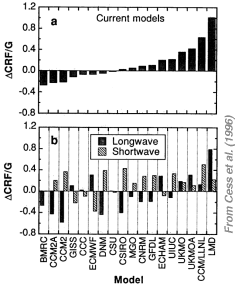 Well, other than the part about you being almost competely out to lunch on this, OK! :)

More when I get a chance.

At the bottom of page 3 in my copy of the Hansen paper you cite, Hansen states "most climate models in IPCC (2007) used aerosol forcing about -1 W/m2". His Figure 2 in that paper shows the range of estimates the IPCC 2007 thought existed as between -3 and 0.

Although he likes to joke about how uncertain he thinks aerosol estimates are by claiming he got his grandchildren to pick a number for his group to use when preparing their IPCC AR4 submission ("if you think that's not very scientific you should see what the other guys do"), in that "Earth's Energy Imbalance and Implications" paper he says one of the implications of his revised estimate for the planet's energy imbalance, i.e. .75 degrees C at most, is that the aerosol forcing is -1.6 W/m2.

His Figure 7 illustrates how he plays around with models to get an inferred aerosol number.

He's calling for measurements - "continued failure to quantify the specific origins of this large focing is untenable, as knowledge of changing aerosol effects is needed to understand future climate change".

David Lewis, you need to publish this blockbuster immediately so you can bring down the church of climate and institute the school of NewScience. Let us know when you submit so we can folla.