The most commonly cited measure of hurricane activity is ACE - Accumulated Cyclone Energy.

Except it's not an energy; its definition is

where the summation (that's the capital sigma, "Σ") for a particular storm is taken every six hours starting at midnight, vmax is the estimated maximum sustained velocity of the storm, and the 10-4 is just to make the number reasonably small and friendly.

This isn't an energy, because it doesn't take into consideration the mass of the storm, which is the total of its density for every small parcel of air times the volume of that parcel. (If you assume all storms have the same height, you can substitute area for volume.) That's what the new metric IKE does - Integrated Kinetic Energy -- which I wrote about earlier this year.

It was invented by Vasu Misra and colleagues at Florida State University. (Here's a PDF of their preprint.) In practice the integral is taken every six hours, but does include a storm's size -- Misra et al take the storm's height to be 1 meter, centered at the 10-meter level. And if you want to gauge a storm's potential for damage, you're going to want to know its size as well as its velocity.

TIKE - Total Integrated Kinetic Energy - is then the sum of all the IKEs.

After Hurricane Haiyan I asked Misra if he'd calculated its IKE, which he hadn't, but he and his colleagues did just calculate the TIKE for the 2013 Atlantic Hurricane system. As the figure on the right snows, it was near a record low of 1,350 terajoules (TJ), with mid-September's Hurricane Ingrid in northern Mexico accounting for 41% of that.

(By way of comparison, the yield of the bomb dropped on Hiroshima was 63 TJ, but this isn't really a direct comparision, because, again, the height of the storms is taken to be 1 meter -- in essence, all storms are taken to be the same height, which is then divided out of the definition.)


"... the total TIKE value for 2013 is equal to only 16% of the average annual TIKE value from 1988-2012. By this metric, the 2012 season was about ten times more active than this most recent season, and Hurricane Sandy accumulated more kinetic energy than did the entire 2013 season. The only North Atlantic hurricane season since 1988, to accumulate less TIKE than this past season, was the 1993 season, which had just over 1000 terajoules of track integrated kinetic energy."

So how do TIKE and ACE compare? This is from Misra et al's paper: 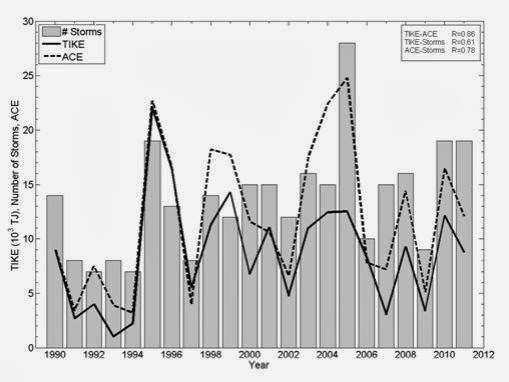 You can't really compare TIKE and ACE, since they have different units, but you can compare their trends (relative to, say, their total average).

Ryan Maue publishes the monthly ACE values for the globe and four different regions; for the North Atlantic hurricane season (assuming it's over), the total ACE for 2013 was 29, compared to an average of 94 since 1970, and 133 last year.

So this year there was an even bigger dropoff in TIKE than in ACE. 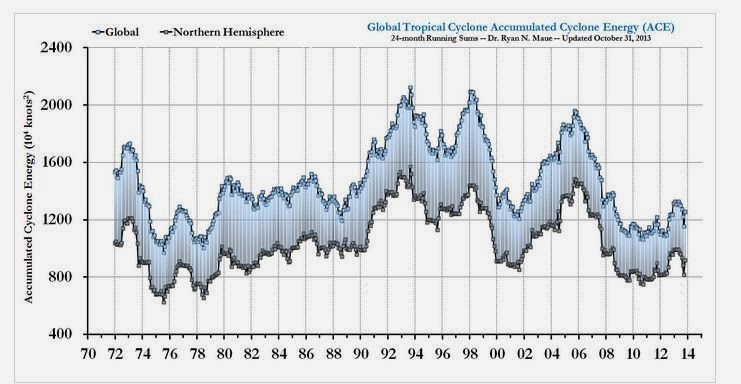