Another Record in the Western Pacific: Australia 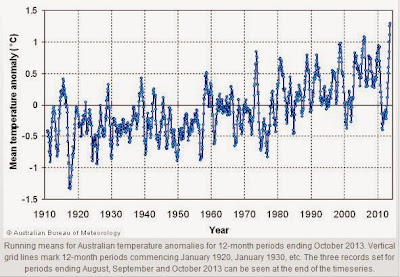 Another indicator of how warm the western Pacific region is lately: Australia has seen its warmest 12 months on record.

From the Australian Bureau of Meteorology:


October mean temperatures were unusually warm, with a national anomaly 1.43 °C above the 1961–1990 average. This means that Australia has seen 15 consecutive months of warmer-than-average temperatures, with numerous records broken as a result.

This continuation of unusually high spring temperatures has been sufficient to break the national record for the warmest 12-month period again, the third consecutive month in which a new record has been set.