This is why you shouldn't take your science from politicians; from The Independent, writing about the Cowtan and Way study:

Of course, it's perfectly plausible that both the ocean is warming and surface warming has been underestimated, and (therefore) that the rate of global warming is accelerating....

At least Lord Lawson of Blaby, a prominent scoffer in the UK, is willing to first read the paper:

Other people are spinning as fast as they can. David Whitehouse sniffs that the paper's explanatory video wasn't warranted -- because, you know, we just can't have any attempts to clarify and explain the paper's findings:


This research is interesting but doesn’t live up to the headline that it explains the ‘pause.’ It also does not warrant such an extensive press release, complete with explanatory videos. It is clear that it has been used as a political tool to deride ‘sceptics’ who rightly see the ‘pause’ as significant. By aiming at ‘sceptics’ such an approach also derides many working scientists who are trying to explain the ‘pause.’ This is regrettable.

The Pause has been good to scoffers and naturally they will be sad to see it go. WUWT has had several posts on Cowtan & Way since it came out -- do you remember when WUWT once criticized the surface station records? Now they are defending them. It must be very confusing.... 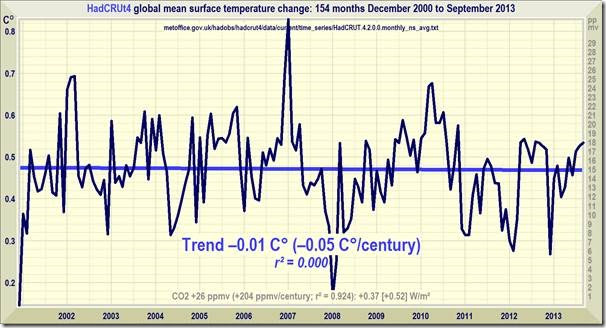 Why would you pick a seemingly random starting point like December 2000? Do you even have to ask? It's the first month when the HadCRUT4 linear trend to the present turns negative:

Their strongest argument would be to claim that the UAH dataset is not reliable. But they can't because UAH are their friends. And they like the strong natural variability of UAH so much and also the shortness of the dataset, that makes global warming look so much less important.

(Victor, are you going to be at AGU in San Francisco?)

Carl Mears of RSS just commented on my blog and thinks that the satellite data should not be any problem for this paper. If anyone can judge that he can. So that is good news.

Here's a link to Victor's post, well worth reading:

The MetOffice said this almost 4 years ago:

"New analysis released today has shown the global temperature rise calculated by the Met Office's HadCRUT record is at the lower end of likely warming."

Did the warming rapidly increase at the poles in 98 or has warming always been faster in the poles compared to the rest of the globe?

If it's the latter then it doesn't seem like this really explains the pause because the warming at the poles weren't accounted for before the pause.

If I'm misunderstanding something please let me know, it's just not making sense to me.