An article in this week's Science magazine suggests that one factor behind Typhoon Haiyan's immense strength was warmer ocean waters underneath the surface. 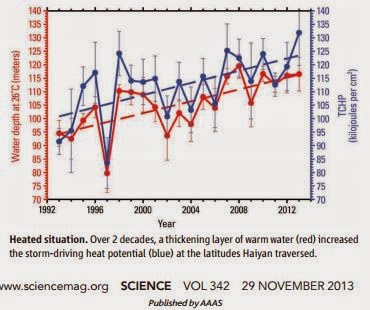 Tropical storm watchers agree that Haiyan was probably the strongest typhoon to make landfall when it slammed into the Philippines on 8 November, packing winds of up to 314 kilometers per hour. What gave Haiyan, which killed thousands and displaced millions, its deadly wallop?

Researchers think they have at least a partial answer to that question: unusually warm subsurface Pacific waters east of the Philippines. A related phenomenon—rising sea levels in the western Pacific—likely abetted Haiyan's devastating storm surge, which caused more deaths than the winds themselves.

Typhoons draw heat from the ocean for the energy that generates their winds. Typically, as a storm's winds increase, they stir up deeper, cooler ocean waters that temper its strength. This cooling effect "is nature's brake to stop typhoons from intensifying," says I-I Lin, a specialist in typhoon-ocean interactions at National Taiwan University in Taipei.

Drawing on data from satellite observations and Argo floats—thousands of instrumented, subsurface probes that measure ocean temperature, salinity, and current speeds—Lin and others have documented a steady 2-decade rise in subsurface temperatures in the western North Pacific and a bulging warm water layer. The warmer and thicker that subsurface layer, the more heat is available to feed a storm. Oceanographers use a measure called the Tropical Cyclone Heat Potential (TCHP) to quantify the heat reservoir. Lin and colleague Iam-Fei Pun reported online on 3 September in Geophysical Research Letters that the TCHP where most cyclones develop in the western North Pacific has increased 10% since the early 1990s.... While surface waters along Haiyan's path were only slightly warmer than normal, waters down to 100 meters were 3° warmer than the historical average. So as Haiyan churned up western Pacific waters, it drew more wind-intensifying heat, Lin says.

But it's not nearly as simple, these researchers say, as "global warming means a warmer ocean":


The warm bulge in the western North Pacific is the result of stronger easterly trade winds. This phenomenon also aggravated Haiyan's storm surge. In addition to blowing heat westward, the winds are literally piling up water in the western Pacific, where the cumulative sea-level rise over the past 20 years exceeds 20 centimeters, says Bo Qiu, an oceanographer at the University of Hawaii, Manoa. "It is likely that the elevated sea level contributed to the flood and inundation problems" in the Philippines, he says.

While many observers blame Haiyan's destructive power on climate change, tropical storm experts say there is little hard evidence of a link. "It is possibly natural variability," Lin says. Nor is it certain that the western Pacific has become a supertyphoon breeding ground. Although warmer subsurface waters might raise the risk, Lin says, atmospheric conditions may not always cooperate.

Aaron said...
This comment has been removed by the author.
12:58 PM

Have you seen this?

Emanuel and his colleagues took a computer model they use to forecast the wind speeds in a storm like Haiyan and ran it with the thermodynamic conditions that were present 30 years ago, in the 1980s, before the warming of the last few decades. They compared it to the model using current conditions.

“And when we do that,” Emanuel tells The World, “we find that the wind speeds are about ten pecent larger now.”

Emanuel says the destructive potential of a windstorm goes up quickly with wind speed, “so that really corresponds to something like 30 to 40% more damage than the same exact event might've done had it occurred in the thermal environment of the 1980s.”

So does that mean climate change was responsible for this much greater damage?

“The next step in that is to say, why was the thermal environment more favourable?” Emanuel says. “We haven't really done that, but the first culprit we look for is the global warming phenomenon.”