"Without models, there are no data"

From the introduction to A Vast Machine: Computer Models, Climate Data, and the Politics of Global Warming (Infrastructures) 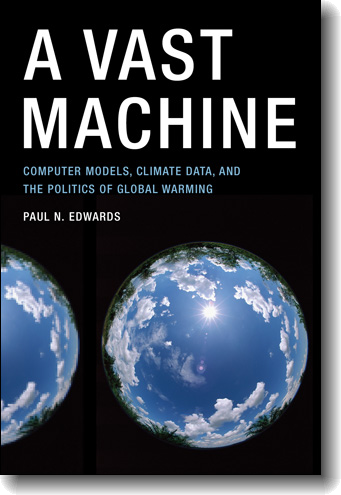 Unless you have been in a coma since 1988, you have certainly heard or read a story that goes something like this: Global warming is a myth. It’s all model predictions, nothing but simulations. Before you believe it, wait for real data. “ The climate-studies people always tend to overestimate their models, ” the physicist Freeman Dyson told an interviewer in April 2009. “ They forget they are only models.” In the countless political controversies over climate change, the debate often shakes out into a contest: models versus data.

This supposed contest is at best an illusion, at worst a deliberate deception — because without models, there are no data. I ’m not talking about the difference between “raw” and “cooked” data. I mean this literally. Today, no collection of signals or observations — even from satellites, which can “see” the whole planet — becomes global in time and space without first passing through a series of data models....

Nor is there any such thing as a pure climate simulation. Yes, we get a lot of knowledge from simulation models. But this book will show you that the models we use to project the future of climate are not pure theories, ungrounded in observation. Instead, they are filled with data — data that bind the models to measurable realities. Does that guarantee that the models are correct? Of course not. There is still a lot wrong with climate models, and many of the problems may never be solved. But the idea that you can avoid those problems by waiting for (model-independent) data and the idea that climate models are fantasies untethered from atmospheric reality are utterly, completely wrong. Everything we know about the world's climate — past, present, and future — we know through models.