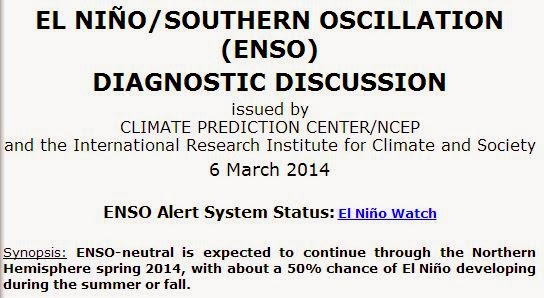 NOAA's Climate Prediction Center puts the chance of an El Niño this summer or fall at "about 50%."

You know what that means?

If it happens it means that contrarians will suddenly understand the need to correct for ENSOs when figuring out the underlying temperature trend.

Also, it will mean the accuracy of surface stations will again be disputed. Isn't it funny how during "the pause" the surface station record has been just fine? Anthony Watts in 2009:


"The reliability of data used to document temperature trends is of great importance in this debate. We can't know for sure if global warming is a problem if we can't trust the data."
— Is the U.S. Surface Temperature Record Reliable?, 2009

Added:
In a Huffington Post story about the forecast, Kevin Trenberth says:


"This could be a substantial event and I think we're due. And I think it could have major consequences....

Trenberth said this El Nino may even push the globe out of a decade-long slowdown in temperature increase, "so suddenly global warming kicks into a whole new level."

The article also notes that an El Nino could bring much needed rain to California and the American southwest.
Posted by David Appell at 3/06/2014 10:28:00 AM

It will be interesting to see how ENSO develops this year. If it occurs it might put a stop to the "pause" talk for a while, but that meme will reappear in future years. Maybe in 2020 we will be reading claims that Global Warming stopped in 2014.

El Nino might bring welcome rain to the US west but here in Australia it means very dry and hot conditions.