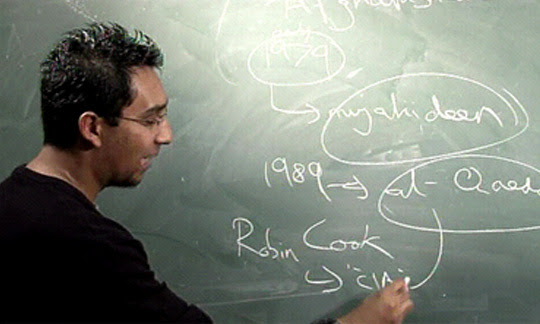 Whoa, this is interesting -- the guy who wrote the Friday article in Guardian about a study climing an "irreversal collapse" of industrial society -- -- Nafeez Ahmed -- is apparently a 9/11 truther and conspiracy nut.

He seems to be deleting blog pages from his past, such as this one which Robert Wilson says was about 9/11 conspiracies. Here's Google's cache.

Manmade climate change -- it's no longer just the deniers you have to worry about.

By the way, this model, by Motesharrei et al, is not very sophisticated at all. It only consists of four simple equations: two that describe a predator-prey relationship between "Elites" and "Commoners," one for the natural resources of "Nature," and one for accumulated "Wealth."

That's it. It's a very basic toy model. The authors write, "This minimal set of four equation seems to capture essential features of the human-nature interaction and is capable of producing major potential scenarios of collapse or transition to steady state." They solve them under various assumption and find

Michael Tobis wrote a pretty strong critique of another "doomer" the other day here - http://planet3.org/2014/03/13/mcphersons-evidence-that-doom-doom-doom/

I took a look at the modeling paper and had the same reaction you did. Would it have resonated differently if the "elites" were labeled "takers", and the others "makers"??? There sure seems to be a tendency to read way too much into such a simple model. That said, it did show some interesting variations on the old predator-prey oscillation/collapse pattern.

To be fair, the authors DO say if we are somehow able to change our stripes and somehow change ourselves and change societal direction, we can avoid what has happened so often to societies in the past. And to every organism in the history of the planet that outgrows its resources.

Nature bats last, and we are a part of nature, no better, not special.

Well of course. You don't expect the sensible science-based journalists to get promoted as the people trying to inform their readers about the problems. They might convince the people nearer the center of the population and make a difference.

The tactic is always to teach the controversy, promote people on the extremes of the issue, and hollow out the center. The industry that wants to delay action funds the extreme points of view on all sides.

The hardest thing for the true believer iconoclast to understand is that he may be a tool in the hands of the very enemy he thinks he's attacking.

NA has promoted the Methane Emergency stuff, for example, over and over.

For more on the tactic, look at this story:
Tribune watchdog: Playing with fire -- Chicago Tribune
http://media.apps.chicagotribune.com/flames/index.html‎

"With cigarettes starting deadly fires, tobacco companies created a new scapegoat — the furniture going up in flames — and invested in a national group of fire marshals ...."

The wacko messengers get the funding to delay action.