About Today's Flooding of the Colorado River Delta 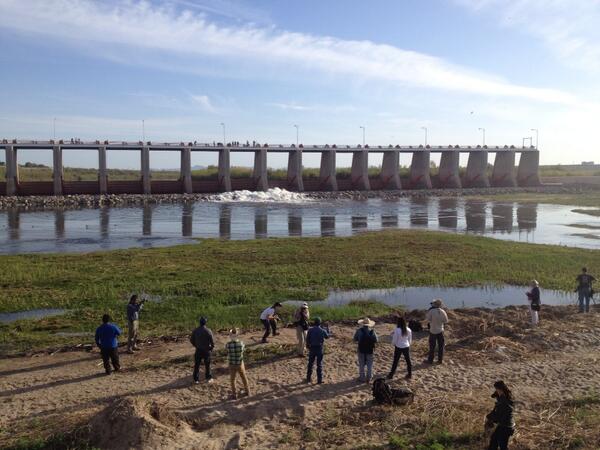 John Fleck tweeted this picture of the Morelos Dam on the US-Mexican border being opened today, spreading water into the Colorado River basin.

Science magazine had an interesting article this week from Erik Stokstad about this.

Stokstad wrote that the Dam will be open for almost 2 months. But the amount of water is "just 0.7% of the 18.5 billion cubic meters that once reached the gulf each year, mostly as spring floods."

"Just 3% of the original extent of cottonwood and willow trees remains."

The maximum flow of the outlet will be 120 cubic meters per second, and that will last only for 3 days. "The river will probably be no more than hip-deep in places."

"About 2 dozen scientists, plus graduate students and volunteers, have spent the past several weeks studying the river channel."

The outflow will end on May 18th. "Smaller flows will continue even after May. That's because a coalition of six environmental groups has raised about $7.5 million to plant trees and start buying up to 65 million cubic meters of water from Mexican farmers, so it will reach the riverside vegetation rather than be used for agriculture."

That's just kind of sad, having to buy water for nature. This is even sadder:


"When the influential American conservationist Aldo Leopold canoed down the Colorado River delta to the Gulf of California in 1922, he was awestruck by endless wetlands teeming with wildlife. Leopold vowed to never return, fearing that the wilderness wouldn't live up to his memories. He was right...."

--
Addendum: Nature magazine wrote about this too. The three-day pulse will be March 27-29, "meant to mimic a small-scale spring flood."

Can David not grasp that some of us skeptics became almost as fanatical as the believers in global warming on realizing that the AGW debate is a moral issue on which the survival of mankind may depend ?