When Will Economic Growth Ever Be Enough? 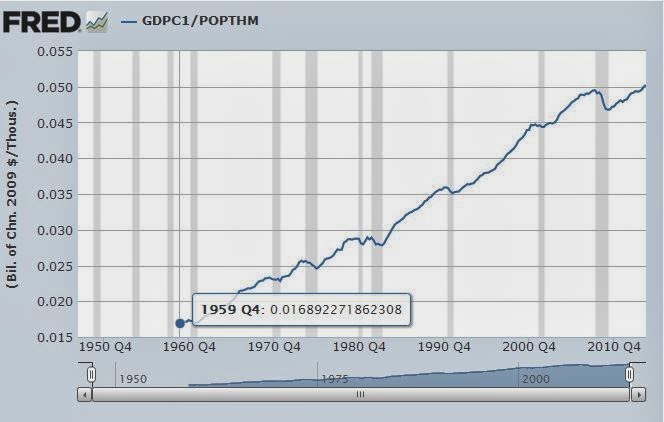 Judith Curry has a post about "Growth vs Sustainability," presenting two views:

"Growth Can't Go On," and "What does it mean to be anti-growth?"

A related question is, why isn't growth ever good enough?

When will the U.S. be rich enough to pay for clean and sustainable energy, instead of treating the atmosphere as a waste dump for CO2?

The figure here is a graph of U.S. real per capita GDP -- Gross Domestic Product corrected for inflation, per person in the country. It's in units of 1/1,000,000 dollars, but you can multiply.

It has just about tripled since 1960.

Now, 1960 wasn't a terrible time in the U.S. People weren't starving. They weren't hudding in shantytowns, begging for food or warmth or an education.

By no means was everything perfect -- far from it. But it's wasn't a bad life, certainly not as far as human history was concerned. And what was bad was mostly a matter of hard human hearts, and not money per se.

After all, they had money to go to the moon and to fight a war.

Few people knew about the dangers of CO2 then -- though some did -- but if you would have asked them to pay for clean, renewable energy, what might have been their response?

They might well have said, gee, that's a nice idea, but you know, we just really can't afford it right now. Life is expensive and we have lots of bills and a government to support, but we just can't afford not to use cheap coal and cheap oil and cheap gasoline, wherever we can find them.

But, they will say...our decendants will surely be wealthier than we are, so why don't you ask them to sacrifice? They'll be able to afford it.

And they would have been right -- their descendants were much wealthier than them, real per capita wealth having increased by an average of 2.0% per year from then to now.

Which brings us to 2014. Real GDP is almost three times higher, per person.

And yet most of us are hardly more willing to pay for our pollution than were people in 1960 -- even though we are far richer than they were, and we now know far more about pollution and its consequences.

Yet we still complain that we can't afford it. We still insist that future generations will be much richer than we are, and they can afford to pay for clean energy. But not us.

If we can't pay for clean, sustainable energy now -- when we're 3 times richer than our people were two generations ago -- why should they be able to pay for it then?

Won't they be in the same predicament we are now, paying for ever more expensive medical tests and treatments in order to live a few years longer (can't blame them), and to buy their iHologram phones and satellite-driven cars and endless batteries for the robot that will clean their house and cook their dinner?

So when does it end, if not now?

The quest for more GDP will probably never end, but people will automatically transfer to renewable energy when it is finally cheaper (and dispatchable?) than fossil fuels.

GDP and GDP/capita may be useful metrics for measuring economic growth but … they're useless for a lot of other economic measures because they give no information about the distribution of the income from that production, etc. GDP/capita fails to reflect the trend in income inequality in, say, the US where the median income was lower in 2008 than it was in 1997. Furthermore, no government has figured out how to expand a country's economy without degrading the ecosystem - it's the ongoing global challenge isn't it?

But renewable energy is arguably cheaper now, once you include the negative externalities of fossil fuels. But I get your point.

Growth is not really the No 1 problem.
It is just multiplying stupidity added to a system that is already intolerably stupid.
If we stopped growing the present economy, we would still run out of materials.

It is the throughput of materials - beginning with carbon, but running on through metals, and then - stupidity on stupidity - the shrinkage of resources like soil, forests and fisheries that should be inexhaustible if properly managed.

The paradox is that in making this transition to the cyclical economym we have to grow the benign, green sector of the economy. Which is intrinsically labor intensive. Which means jobs.

This line of thinking is expanded here: http://greenerblog.blogspot.co.uk/2014/03/economic-growth-is-merely-tinfoil-hat.html

This is my issue with this branch of climate science. I accept AGW, accept that it is real, growing, artificial and a menace. I don't accept the politics that have accrued to it, that I have to unplug my life and go live in a tree right this minute, and turn over the nation's affairs to a cabal of greenie wiseheads.

The distribution of wealth is also important. If most of the wealth represented by a 2.86 factor of increase in GDP went mainly to the relatively few (to the extent that many saw their wealth reduced), then too many people now would find it much harder paying for clean energy than they have had 40 years ago paying for a war and moon landing.

Our incipient decent to worldwide feudalism is likely going to be a lens through we view many important topics, thanks to that Piketty book which is making an impression.

Sanity: No one is proposing you go live in a tree. It's a blatant red herring.