You often hear some people say that CO2's effect is logarithmic, or that it's going to be saturated so that further increases in its concentration won't affect climate....but neither is true.

CO2's radiative forcing near the values we're at -- a few hundred parts per million -- are logarithmic, but at higher values that doesn't hold rigorously. I've always wondered what the forcing was, and a cool new paper calculates it out to 50,000 ppmv. 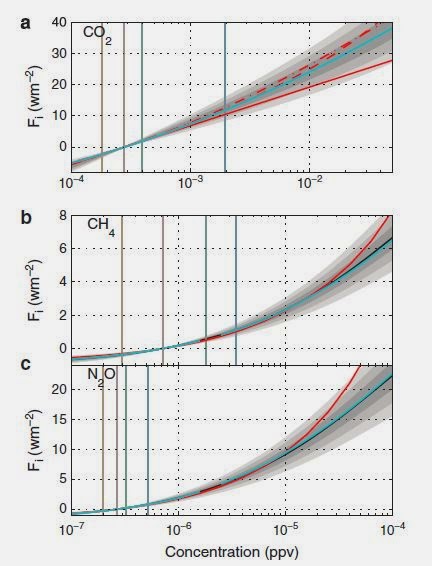 In the plots to the right, the black lines (mostly overwritten) are the new calculated RFs, the cyan line is the new fit (see below), and the red line is the IPCC simplified fit from 2001.

So CO2's nnew RF is slightly higher, where the difference starts to matter around 1000 pppmv, and the RFs for methane and N2O are below the previous IPCC fits, but only at very high concentrations.

(By the way, humans start to experience problems at about 15,000 ppm, and we're probably not stupid enough to emit that much CO2. Probably.)

The paper gives new formulas for fits to their results: 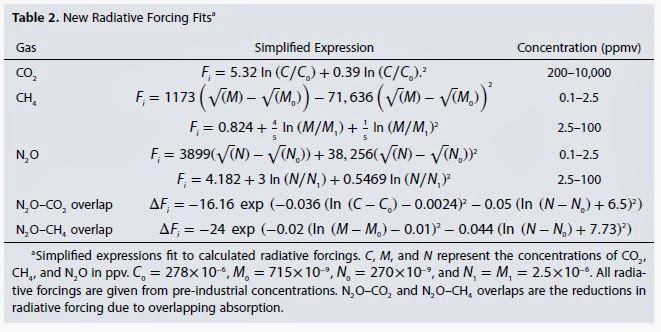 In particular, the first equation above is the old CO2 RF formula (but with a prefactor of 5.32 instead of 5.35), plus a term that goes like the square of the logarithm of CO2 concentration. (So it's like a Taylor series expansion with the independent variable being ln(C/C0)).

I asked the lead author, Brendan Byrne (who's a graduate student at the University of Victoria in British Columbia) what this meant for climate models, and he said not a lot for our future anthropogenic world, but potentially a lot for models of deep time, where CO2 was at times several thousand ppm:


I don't think that the new RF expression will make much of a difference for CO2 doubling or even emissions over the next century. The differences start to become quite big as the CO2 concentrations increases above ~1000 ppmv. The RCP8.5 year 2250 CO2 concentrations are ~2000 ppmv at which point you start to see a couple Wm-2 difference from the simple logarithmic fit. Unfortunately, concentrations this high or higher cannot be discounted for long-term anthropogenic emissions.

But for deep time:

Byrne said the higher order terms for CH4 could come in if there is was a destabiliztion of methane clathrates, like might have happened at the PETM.

However, there may be effects on climate models below the year 2100 due to latitudinal effects:


The one place where I could see results from this paper making a significant difference in climate simulations for concentrations at and below 2100 values would be in the latitudinally resolved forcings. Several climate models of intermediate complexity do not consider the latitudinal difference in radiative forcing, instead they apply the same forcing to each grid cell. In reality, radiative forcing are quite dependent on latitude and can vary by 37-47% from the tropics to the poles. This is shown in figure 6 [above]. This is primarily caused by lower surface temperatures. The less radiation emitted from the surface then the less long-wave radiation there is available for greenhouse gases to absorb. How much of a difference this would make in the simulations is unclear though.

There's a lot more to the papers, such as how to define the tropospause (the boundary between the troposphere and stratosphere), and how to handle overlaps between the different GHGs. Definitely worth reading if you like this kind of science.

Added:
By the way, CO2 isn't even saturated on Venus, where the concentration of CO2 is 965,000 ppmv. In his 2011 Physics Today article, Ray Pierrehumbert wrote (in a sidebar): 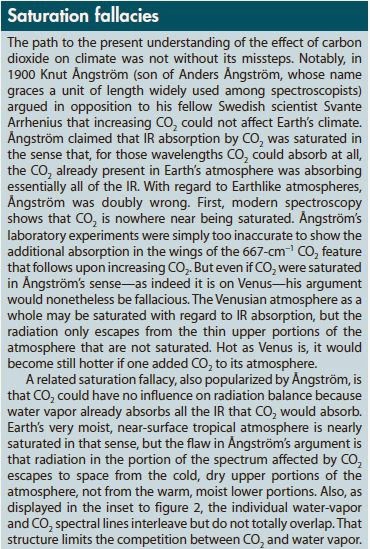