The Intellectual Blackout at the Powerline Blog

It's not often that the very first line of an article is outright wrong, but John Hinderaker manages it at Powerline, which Mark Steyn gleefully reposts.


Climate alarmism is not based on empirical observation; rather, it is entirely predicated on computer models that are manipulated to generate predictions of significant global warming as a result of increased concentrations of CO2.

In fact, there are plenty of good estimates of climate sensitivity from studies of past climate -- really, you don't even need a computer model to know there are going to be consequences to dumping CO2 into your own backyard. Here's a 2012 paper from Royer, Pagani and Beerling, "Geobiological constraints on Earth system sensitivity to CO2 during the Cretaceous and Cenozoic," that finds computer models may be underestimating climate sensitivity 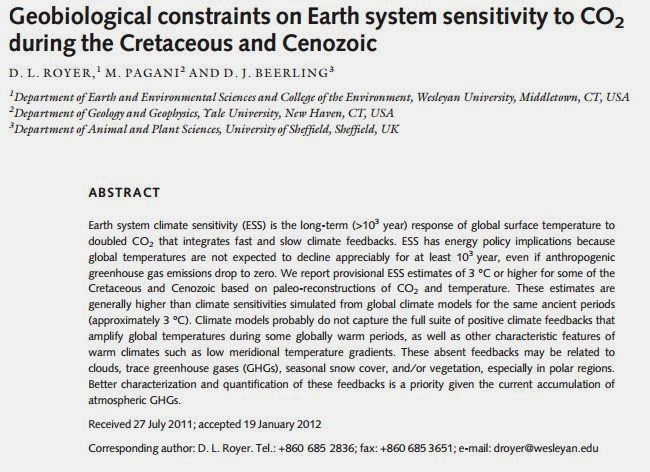 They conclude, "A growing body of evidence supports an ESS often exceeding 6°C during glacial times and 3°C during non-glacial times."

There are, of course, plenty more such papers:

and on an on; a nice review is this 2011 study by the National Academy of Sciences:

"Understanding Earth's Deep Past: Lessons for Our Climate Future," Committee on the Importance of Deep-Time Geologic Records for  Understanding Climate Change Impacts; National Research Council of the National Academies (2011).

Hinderaker is also flat-out wrong when he writes


In the case of climate models, we know they are wrong: they don’t accurately reproduce the past, which should be the easy part.

I blogged last year about how NASA GISS's Model E2 reproduces the past:, with problems only in the last decade due to the the well-known missing heat problem in the Pacific Ocean. (This is how models get better, and how they have always gotten better -- by comparing their output to observations and seeing what's missing.)

And of course the IPCC has included reviews of model performance in every one of its Assessment Reports -- Hindenraker might have at least looked there. In the 5AR first volume there's an entire chapter, Chapter 9, titled "Evaluation of Climate Models," which goes into exhaustive detail about the performance of climate models. He could at least have looked at Figure 9.8 from that chapter, pg 768: 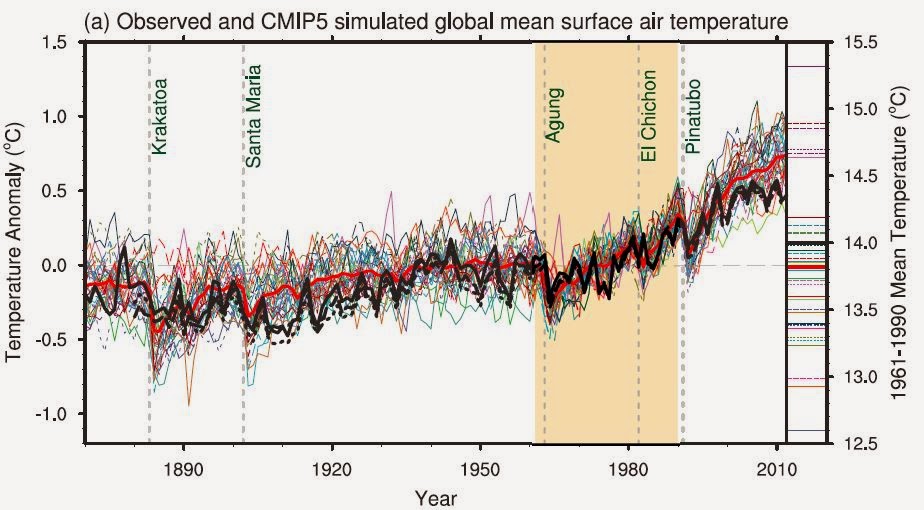 Here the solid black line is the average global surface temperatures from HadCRUT4, the dashed line the same from GISS, and the solid red line the CMIP5 model mean.

Hinderaker lauds Tim Ball's views on climate models... So how well does Tim Ball's climate model do? Oh, that's right, Tim Ball has never made a climate model in his life (I can't think of one contrarian who ever has), and his highly padded publication list seems to contain perhaps 4 peer reviewed articles in an almost 30-year career. That's what passes for an expert in Powerline Land.

Hinderaker clearly lives in the same subuniverse as Steyn -- climate science is wrong, BECAUSE HE SAYS SO. There's no need to understand or evaluate the science, because IT'S WRONG. So you can say anything you want about the science and about the people creating it, literally anything, regardless of its truth or untruth, because IT'S ALL WRONG -- and his readers don't want to hear any differently anyway.

Thanks for this lucid analysis David. I expect that you have seen Tamino's piece on Hansen's 1988 prediction: http://tamino.wordpress.com/2014/03/21/hansens-1988-predictions/

Unfortunately very few people in public life (ie politicians) call out the sort of dishonesty that you describe in the post.

In Australia a former head of our central bank, Bernie Fraser, has made some strong statements including the following: “The public generally are getting bored with it all and switching off. The problem seems to be to be that the bad guys are spreading untruths and exaggerations and assertions without a lot of hard evidence and serious debate, cheered on by the big companies who make similar assertions and repeat those assertions without thorough debate.”

Unfortunately Fraser's view went largely unreported in Australia's media, at least in part because it is controlled by Murdock.

Here is the link: http://www.theguardian.com/science/2014/mar/12/climate-change-body-chief-bad-guys-won-when-the-good-guys-lay-down

David here is a contrarian forecast.There has been no net warming for 16 years and the earth entered a cooling trend in about 2003 which will last for another 20 years and perhaps for hundreds of years beyond that.
The current weather patterns in the UK and USA are typical of those developed by the more meridional path of the jet stream on a cooling earth. The Fagan book “The Little Ice Age ” is a useful guide from the past to the future. The frequency of these weather patterns, e.g. for the USA the PDO related drought in California and the Polar Vortex excursions to the South will increase as cooling continues
The views of the establishment scientists in the USA and the UK Met office’s publicity in this matter reveals their continued refusal to recognize and admit the total failure of the climate models in the face of the empirical data of the last 15 years. It is time for the climate community to move to another approach based on pattern recognition in the temperature and driver data and also on the recognition of the different frequencies of different regional weather patterns on a cooling ( more meridional jet stream ) and warming (more latitudinal jet stream ) world.
For forecasts of the coming cooling based on the 60 year (PDO) and the 1000 year quasi-periodicities seen in the temperature data and the neutron count as a proxy for solar activity in general see several posts at
climatesense-norpag.blogspot.com
For a review of a 3 year update of a 30 year forecast see
climatesense-norpag.blogspot.com/2013/07/skillful-so-far-thirty-year-climate.html
For an estimate of future NH temperature trends see the latest post at
climatesense-norpag.blogspot.com

(and thank you David, for providing a site where kindred spirits such as Steve and I can find each other. Places like Curry's are just so noisy .)

You write: "Unfortunately very few people in public life (ie politicians) call out the sort of dishonesty that you describe ..."

Very true, I completely agree. But it is heartening to find groups doing some "calling out" like this:

Imagine! Equating soot (carbon black plus particulate contaminants) to carbon dioxide, and CO2 to H2O! Are such people invincibly ignorant, or do they believe we are?

Anyhow, we must all speak up freely and fiercely for what we believe to be true. Thank you for being part of that mission.

You're very wrong that "there has been no net warming for 16 years."

The planet has warmed enormously in that time, especially in the ocean but including on the surface. It's called "global warming," not "surface warming."

Warming trends since 2003 are meaningless -- they depend on weather, not climate.

There is no scientific expectation at all that the planet is entering a cooling trend.

I recently read Fagan's book. It is mostly confined to northern Europe, with slight mention of North America, and does not say one iota about climate on the global scale.

No one equates them.

But black carbon is an anthropogenic warming factor.

Nor does anyone equate CO2 and water vapor. That's typical of the obfuscations you've made since you've started commenting here.

David The best metric for climate change is the SST because of the thermal inertia of the ocean and the fact that we should really be measuring the enthalpy. This latter varies closely with SST. Also using the SST avoids all the problems with the UHI effect etc. Readers can check for themselves whether there has been any net warming over the last 16 years. see the NOAA data at
ftp://ftp.ncdc.noaa.gov/pub/data/anomalies/annual.ocean.90S.90N.df_1901-2000mean.dat
I'm afraid Trenberth's hidey hole for the missing heat has been plugged. The best and most recent analysis of the ARGO OHC data is at
http://www.pmel.noaa.gov/people/gjohnson/OHCA_1950_2011_final.pdf
Table one shows that the heat flux in the upper 100m meters of the ocean declined 90% when the period 1983- 2011 is compared to 2004 -2011. In short the oceans are cooling from the top down as one might expect on a cooling planet.
If you check the posts at http://climatesense-norpag before making further comments you will find a perfectly reasonable scientific cooling forecast based on the 60 and 1000 year natural cycles.
There are others eg
http://scienceandpublicpolicy.org/images/stories/papers/originals/grand_minimum.pdf

No Norman, the best metric for global warming is NOT SST, it is the ocean as a whole.

The ocean is a huge reservoir, so its heat content fluctuates little naturally, and only in response to real forcings.

And OHC is increasing. In fact, the heating is even accelerating.

Dave You say OHC is increasing That is simply not what the Johnson paper shows - again I invite readers to scroll down through the link and check Table 1 at
http://www.pmel.noaa.gov/people/gjohnson/OHCA_1950_2011_final.pdf
and in any event we live at the surface of the earth not in the ocean depths.

Norman, here is the OHC data:

>>in any event we live at the surface of the earth not in the ocean depths.<<

1) Well, we live on the land surface, not the ocean surface, and land surface temperatures ARE increasing; see the CRUTEMP data series

2) the large ocean heating happening shows that the Earth has an energy imbalance, which is from GHGs. Therefore, the slowdown in surface heating will resume, probably with the next El Nino.

Norman, the Johnson paper certainly DOES find the ocean is warming.

Here is the first sentence in their Discussion section:

"Ocean warming is observed between 1950 and 2011 in all layers for both methods of global integration."

Do you often interpret papers to say the exact opposite of what they actually say?