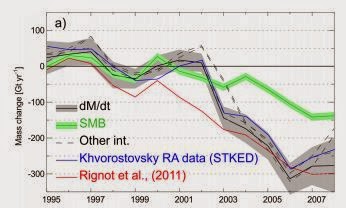 Here's a plot about Greenland's ice, from a recent paper in The Cryosphere by Hurkmans et al.

what is the temp trend in Greenland?

Do you think temp is a leading, coincident, or lagging indicator for ice melt?

"Do you think temp is a leading, coincident, or lagging indicator for ice melt?"

I think ice melts when the temperature is above the freezing point of water.

"what is the temp trend in Greenland?"

IMHO our population will have undergone a major downward adjustment by the time 24m SLR happens. Population biology is a b!tch.

I agree about population -- if nothing else, even the poorest will (hopefully) be less poor in the future, with more access to medical care, so they'll likely have fewer babies. But this story came out the other day:

I saw that David. IMHO demographers need to start working in teams with population biologists, ecologists, agronomists, etc and come up with a multidisciplinary "likely" population under different scenarios.

I think the agronomists cr*p their pants when asked to come up with a plan to feed 9B, let alone 11B.

On the Path Past 9 Billion, Little Crosstalk Between U.N. Sessions on Population and Global Warming
By ANDREW C. REVKIN SEPTEMBER 20, 2014 9:58 AM