Is "Arctic Melting" Due to Bad Data?

Update 9/23: I've heard from two people who were at the Royal Society meeting, and neither of them had heard of this Jonathan Drake paper. I assumed, wrongly, that his tweeting about it (more than once) meant he was presenting, but not he just looks to be after some attention. I should have checked before I blogged.
--------------------

That would be a shocker, to say the least. A tweet from today's Royal Society of London conference on the Arctic:

Here's the full abstract, from a Scribd paper (PDF):

Drake's Twitter page says he is an electronics physicist "designing instrumentation for exploration." He retweeted this Joe Bastardi tweet, so that tells you something right there.

Anyway, from his paper: 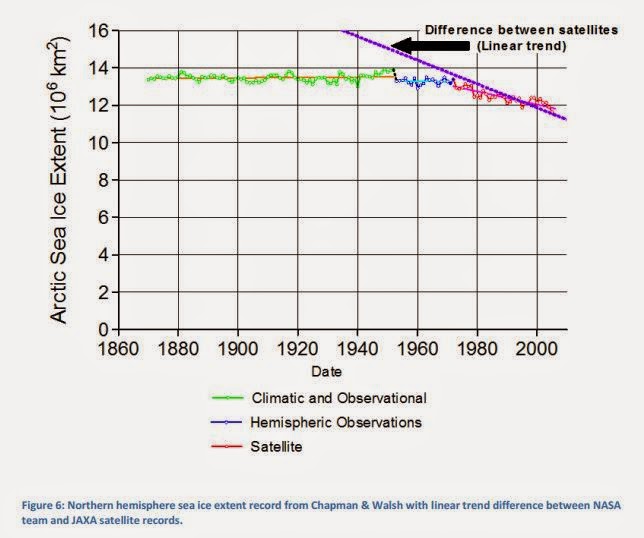 Consider the source.
And have you tried calling NSDIC to ask an expert in the field?
And the evidence is based on more than the "satellite" record, but field observations, visual satellite observations, and (ummm) ships that can actually steam through the imaginary ice that should still be there if the satellite data are wrong.

Yes, I have a message into the NSIDC.... Someone just told me the paper "hasn't come up at all. I'll ask around tomorrow though."

Your post reads as though this paper connect to the royal soc conference?

But paper looks to be uninteresting unpublished speculation of someone with zero relevant expertise/experience/publications.

Oh, the PDF link seems to be pointing to a location on your local PC.

Inuit people are giving up ice hunting. The changeable weather and open water is too dangerous. Storms and conditions cannot be predicted by the signs of their ancestors.

It is possible to ask the wrong questions.