Gordon Fulks, PhD in physics (ever in pursuit of credibility, he insists on using the PhD part, though credibility eludes him at every turn), Oregon climate change denier and serial harraser, has a typical rant in Oregon magazine.

It's full of the usual misleads and falsehoods, like this:


Even the worst of the climate fanatics cannot miss the stark evidence: no net global warming for seventeen years (something none of their climate models predicted), Northwest cooling for 25 years....

Of course, the "17 years" claim is laughably wrong, and a cherry pick itself, but why might Fulks have chosen "25 years" for his claim abou northwestern cooling? You know this by now -- it gives him the result he wants, which is the very definition of cherry picking.

I don't have all the data for the entire Pacific Northwest (the site isn't working at the moment), but I do have it for Oregon. Here's how much warming there's been (linear slope*interval) since depending how far in time back you go: 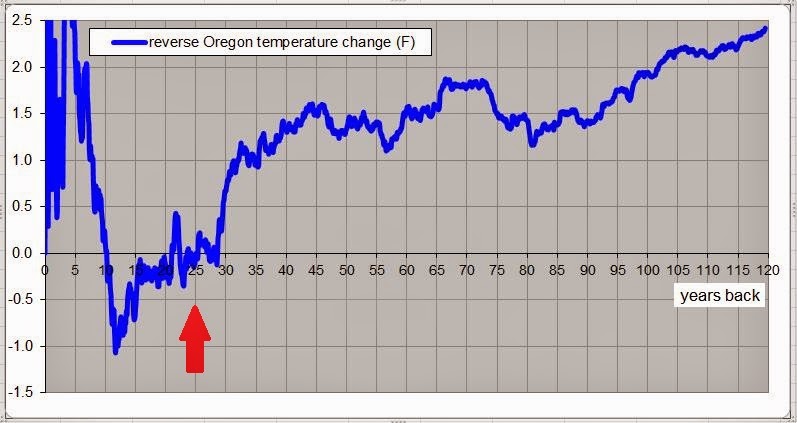 That's right -- there's been warming in 22 years, and a good bit in 29 years and beyond, so what time period did Fulks pick? The one in the middle that just happens to show no warming. Sneaky,

It doesn't seem to matter to this physics PhD that 25 years isn't a period representative of climate. Here's what the World Meteorological Society says:


Climate “normals” are reference points used by climatologists to compare current climatological trends to that of the past or what is considered “normal”.  A Normal is defined as the arithmetic average of a climate element (e.g. temperature) over a 30-year period.  A 30 year period is used, as it is long enough to filter out any interannual variation or anomalies, but also short enough to be able to show longer climatic trends.

So that's two misleads in half a sentence..... I wonder what that comes to over a 30 year period?

There's lots of other B.S. in Fulks' article too, but a man has only so much time in a day.

Update: Here is the same plot for Washington state:

So, unlike Oregon, no real temperature change there in 30 years (unless you want to cherry pick the last 9 years), The average temperature over 30-years there is currently at a record high.

Then there's this falsehood:


Correlating the warming observed after the Great Pacific Climate Shift of 1977 with “Global Warming” from increasing atmospheric CO2 was wrong, because the 1977 event was clearly a Pacific Ocean effect. And that warming did not continue after 1998, because the Pacific Ocean began to change backto its earlier configuration.

In fact, the warming of the top half of the ocean since then has been global, and it started before 1977, and has continued after 1998, even accelerating.

Then there's this sneaky line:

It's sneaky because no one expects an acidic ocean, but instead an ocean that is acidifying, which it is.. (Most Oregon magazine readers likely won't understand the distinction, and, instead of educating his readers, Fulks seems happy to take advantage of their ignorance and bamboozle them).


...near record winter snowfall across the Northern Hemisphere...

which is not reflected in the (2-dimensional) data for Northern Hemisphere snow cover: 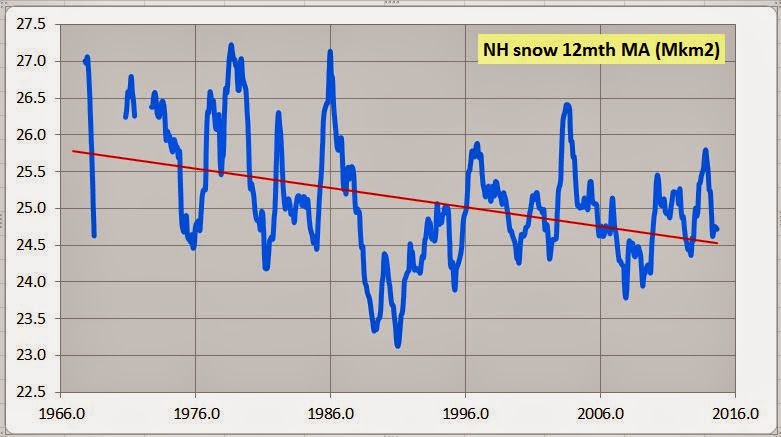 In fact, it's pretty hard to find anything in Fulk's article that is true. Which just goes to show that almost everyone can get a PhD, but not everyone knows how to use it.