Center for American Progress is Passing Around Bad Data

Here's a chart of coal mining employment, in this Huffington Post article of two days ago: 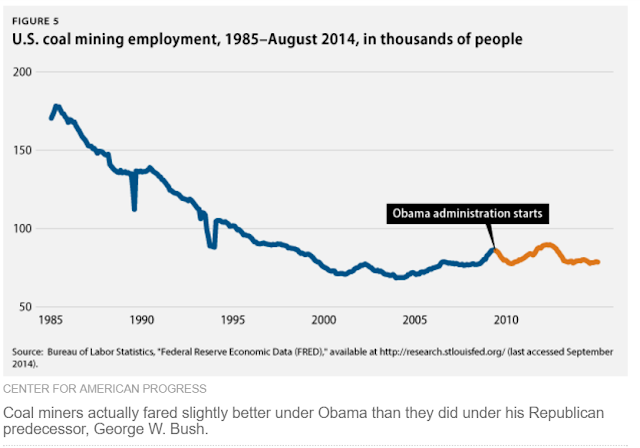 (Update: The Huffington Post removed this plot (without saying so), but it appears in this document from the Center for American Progress.)

Notice the caption, and the orange part of the line that signifies Obama's presidency.

Except this chart is wrong. The orange part is all wrong.

The chart says the data are from FRED, the database from the Federal Reserve of St Louis. But here are the actual data from FRED: 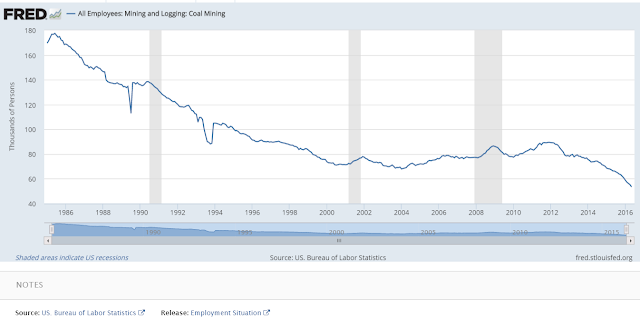 Notice the difference after 2012.

In fact, about 33,000 coal mining jobs have been lost under Obama. No comment now on the merits of that, just that the Center for American Progress seems clearly to have altered the data to be pro-Obama.

ThinkProgress and ClimateProgress are under the umbrella of the Center for Amerian Progress. Recall, they're the ones who won't tell you who funds them. Their president used to be John Podesta, who was Deputy Chief of Staff for Bill Clinton and is now Chairman of the 2016 Hillary Clinton presidential campaign. Maybe publishing bad data is their way of helping her get elected.

You might want to start checking whatever data they present.

David, I'm sorry but I'm not following you. If I go to the Huffington Post article you linked to, it doesn't show the graph that is labeled Figure 5. I can however find this exact graph in an article from the Center for American Progress dated October 6, 2014 .

That Figure 5 has the caption "US coal mining employment, 1985 - August 2014". If I go back to the FRED website and set the end date to August 2014, the graph doesn't quite look like Figure 5 from CAP. Rather it looks more like they had set the end date to August 2013, rather August 2014. On the other hand, I cannot be sure that this is the source of the discrepancy. I do not know, for example, if there is a preliminary estimate of employment that comes out, which is then updated later.

Am I missing something?

Joe, I wrote to the Huff Post article's author, and he took the chart out of the article -- but didn't note that change anywhere, like you're supposed to.