Watson proposed what he calls "improved techniques" to measure real-time velocity and acceleration, and does so for five sets of global mean sea level (GMSL) data, each of which used a different technique. One is Church and White 2011, and you can see the rest below. Watson says existing estimates of sea level acceleration rely on a simple second-order polynomial fit to the entire dataset, then taking twice the coefficient of the quadratic term.

That's what I did here, and found a positive but small acceleration of sea level rise. Using the latest Aviso and CU data, which go through March, I find accelerations now of 0.036 and 0.028 mm/yr2, respectively.

Rahmstorf and Vermeer faulted the quadratic regression technique, "due to...focusing on records that are either too short or only regional in character, and on their specific focus on acceleration since the year 1930, which represents a unique minimum in the acceleration curve."

Watson tries to improve the temporal resolution of the data values. He does this by doing spectral analysis on the data, and finds signals "that have oscillations with a period of the order of ≈40 to 70 years." He thus isolates these slowly varying trends from the respective GMSL reconstructions, gets a much smoother dataset, and takes the first and second derivatives of a cubic fit. That's as far as I'm going into the weeds.

Here are his results (note: they're for maximum values, not the values at the end of the datasets.)

Here are his results in graphical form, over time (thus, not maximum values). 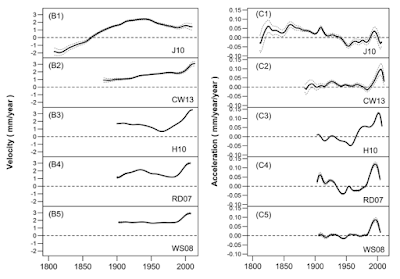 As far as I see he didn't provide an acceleration up to 2014, as he did for velocity. Acceleration looks clearly affected by the 1998 El Nino, and probably is lately too.