Response to the Weekly Standard Review of "Struggling for Air"

Here's another review of Struggling for Air by Revesz and Lienke, by Brian Potts in the Weekly Standard, a conservative publication. (I put some of my impressions of the book here.)

He emailed me to let me know about his article. You should read it too. I don't agree with what he wrote here:


But the first problem with Revesz and Lienke's conclusions in the book is that they completely ignore a critical component: cost.

As far as I know, there was nothing in the Clean Air Act that said cost was a factor; its charge, specified by Congress, was to identity and regulate emissions that had adverse effects "on public health and welfare."

But actually we do know the cost:

So I get tired of hearing about cost, and especially about one-way interpretations of it, because the true cost is that coal causes health problems that are greater than the benefit it provides -- benefit as measured by the market price.

Coal's pollution kills people. It causes more heart attacks, more premature death, more asthma attacks. Conservatives, who should care deeply about the impact and cost such of negative externalities, instead not only ignore them, but whine about them.

It seems they think it is OK, and there is no cost, to rain pollution down on people's head.

I've cited these studies before, but this study, by the once-darling (to pseudoskeptics) environmental economist William Nordquist of Yale:

found that generating electricity with coal or oil creates negative value -- that is, it sends the economy backwards. And kills people in the process.

This 2010 study by the National Academy of Sciences found that in 2005 there was at least $120 billion in damages done to the country, in 2007 dollars.

The cost of a fuel or power source is NOT what you see at the gas pump or on your monthly utility bill.

Don't the words "conservative" and "conservationist" come from the same root word? Yes, they do: 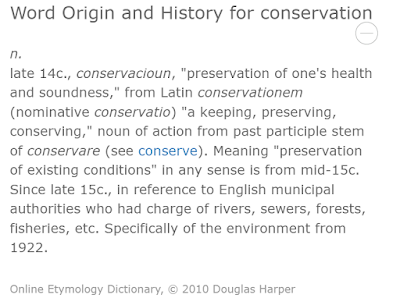 Very few of today's so-called conservatives are really conservatives - rather they are cheer-leaders for borrowing, spending and consuming all you can so as to enrich others.

The conservatives that our parents once were - prudent, budget-conscious, and against social, political or monetary experiments (like defaulting on the credit of the USA!) do not exist any more.