The IRI -- International Research Institute for Climate and Society -- at Columbia University just issued their ENSO forecast. It shows a little less likelihood of a La Niña forming this fall -- "about a 55-60% chance of La Niña during the fall and winter 2016" -- compared to last month's forecast of about 70%.. 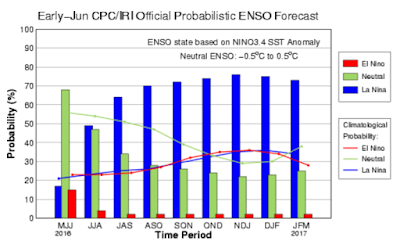 Why does this matter? Only because...some people...are going to interpret a natural cooling fluctuation -- a La Niña -- as indication that manmade global warming is over, or was wrong, or a hoax, or a conspiratorial meme beamed into people's heads via picowaves.

Of course, the last year and a half has been a natural warming fluctuation, too. Mostly. This El Niño saw significantly higher surface and lower tropospheric temperatures, by about 0.3-0.4 C, than were seen in the large 1997-98 El Niño, which itself was about the same margin ahead of the big 1982-83 El Niño.

A better question is if the next La Niña is warmer than previous comparable La Niñas.

But naturally, if you accept AGW science, you feel somewhat confirmed by warmer upward fluctuations, and warmer downward fluctuations. It's sort of like this: imagine you saw Usain Bolt run as an 8-year old. That kid's fast, you think to yourself. Then you see him again when he's 12, and he's running even faster. He keeps making progress. Sure, he loses sometimes, but more often than not he wins, and when he does lose it's not by the margins he once did. This goes on for years and years -- he sets new records regularly, and when he doesn't, his time still brings up his average. And so it goes.

When you expect someone to run ever faster, it's interesting when he does and sets new records. More interesting than when he loses, even when it's by ever smaller margins. I mean, did you see him burst away from the field in Beijing?

PS: Yes, Usain Bolt is getting older and will someday be past his prime. It's not a perfect analogy -- climates don't get "old." Maybe the stock market is better, where ever higher records are expected over sufficiently long time periods.
Posted by David Appell at 7/14/2016 10:10:00 AM