Ocean heat content numbers are out for the 2nd quarter of 2016, and they show big drops from a year ago, due to all the heat released in the recent large El Nino. 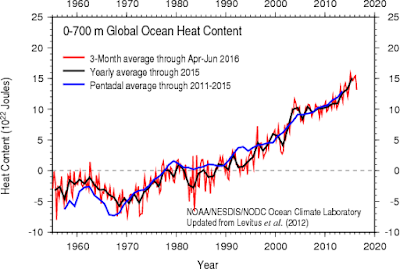 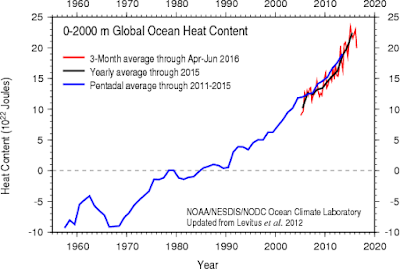 No, this doesn't mean the end of global warming.

As ATTP writes, these numbers are in good agreement with the ensemble median of climate models: 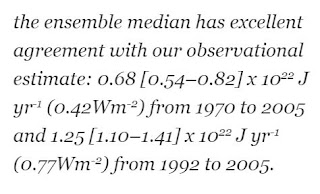 especially when you consider the error bars, which I did not include above.

Climate models certainly don't predict everything accurately -- predictions are impossible anyway, except in hindsight -- but getting the energy imbalance right is probably the most important result of all.

The El Nino, according to ONI, started in FMA 2015 and peaked in NDJ of 15-16. During this time both the GMST anomalies and the OHC anomalies went up. It is not until GMST anomalies start dropping as the El Nino weakened that this drop in OHC occurs. So am I wrong to think some of the loss in 0 to 2000 meter OHC was to the deeper ocean and not just to the atmosphere?

Very good post. You give OHC values as a flux ( in Watts m-2 ), however. Please clarify.

Roger, it's a standard calculation.

I use the area of the Earth because the vast majority of the trapped heat, ~93%, goes into the ocean.

OHC is in units of Joules. That was my comment. You should wordsmith.

IF OHC decreases by J Joules in a time T, then its average rate of decrease is

which has units of Watts per square-meter.

Then you should write "the 0-700 meter RATE of change of OHC...." I know what you meant but others might be confused by your shorthand.

P.S. "Change" is not the same as "flux" which is the rate of change. At least that is how I use the terms. :-) Not a major issue - I have the same type of comment when writers use "resolution" in a model when they really mean "grid increment". Roger Sr

I realize change and flux are different. But "flux" is one of those scientists words that popular readers might not understand. I'm going to stick with change.