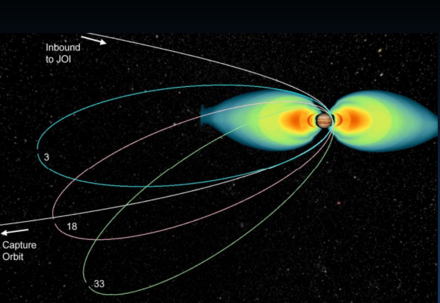 
Another pretty cool thing is that the Juno spacecraft is powered by solar panels, which is something that until recently hadn’t been possible for outer planets. Sunlight is weaker out there, and it wasn’t until this mission that solar panels were efficient enough to power a spacecraft; on top of that the instruments are also very efficient with their power, allowing lower energy generation needs.

There are 18,698 solar cells, which generate 400 Watts at Jupiter's distance from the Sun (14,000 Watts at Earth's distance). Each orbit takes 14 days, and there 37 orbits are expected, so sometime next November or so it will plunge downward into Jupiter's mysterious interior.