How the US is Failing

This graph from the Johns Hopkins site shows clearly how the US is failing to contain the coronavirus, compared to the nine other countries with the most cases: 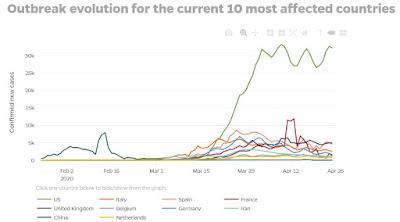 The lines are the 5-day moving average.... In every other country new cases are on the decline. But not in the US. I don't mean that the US has more cases in absolute numbers, I mean the trend since the peak. There really isn't any evidence of a peak in the US, at least on the five-day scale. There's no evidence on the worldometers site either: 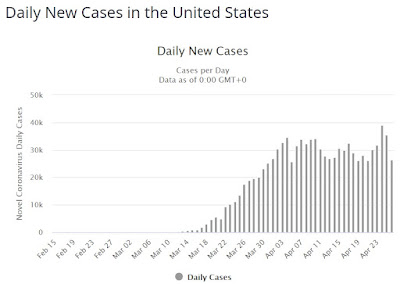 though maybe, perhaps, maybe in deaths. (But deaths are always going to lag cases, of course.) 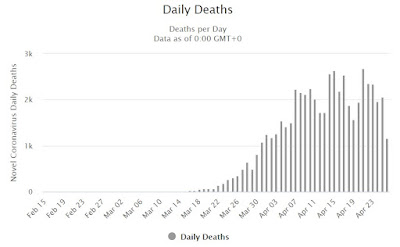 Someone should use the data from the top graph, calculate the average trend since the peaks, and conclude how many extra Americans have died from our inadequate measures and from the idiots who think they have the right to take risks that can and will kill other people. And already are.

There appear to be more US deaths than can be accounted for from the Covid-19 data and actuarial data: 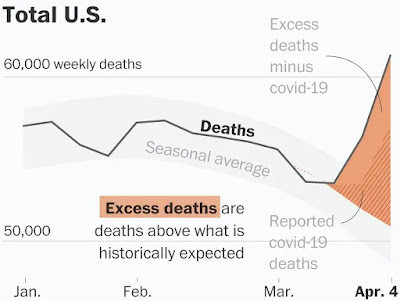 In the early weeks of the coronavirus epidemic, the United States recorded an estimated 15,400 excess deaths, nearly two times as many as were publicly attributed to covid-19 at the time, according to an analysis of federal data conducted for The Washington Post by a research team led by the Yale School of Public Health.

Of course, other countries may well have also missed some deaths -- and these aren't necessarily deaths from Covid-19, but would include deaths from those who died of other things but couldn't, or wouldn't, get to a hospital. But in a real sense these other deaths can be included as deaths due to the virus.

By the way, a few days ago the number of US deaths from Covid-19 surpassed the number of Americans who died in the Vietnam war (47,424). And now you can include deaths from the Gulf War, the war in Afghanistan and the Iraq war.

Funny how all those deaths bother the lockdown protesting right-wingers, but Covid-19 deaths don't to the same degree. Including the certainty that reopening too soon will cause even more deaths. It's just a flu!

PS: I do understand the many people are hurting economically and close to being out of money. Today Gallup said "COVID-19 Disrupts 30% of Americans' Jobs or Finances." But this points to the inadequacy of the federal response. Another $1200 per person would go a long way to getting us to the end of May, when reopening might be a real possibility, at least partially. But many "pro-life" Republicans simply can't stand helping ordinary people (the federal debt! which they had no problem with when they gave a $1.5 T tax break to the wealthy). F-ing unempathetic hypocrites, with McConnell the most soulless one of all.
Posted by David Appell at 4/27/2020 02:06:00 PM

Regarding the top chart:

1. China and Iran should not be included. Their figures are not reliable.

3. The US pattern of new cases is distorted by the rapid rise in the rate of testing. The rate pretty much doubled in the last 4 weeks. It will double again in the next few weeks. Therefore, a better way to look at the trend is to look at hospital admissions. I know these are falling, but I not know where to find actual figures.

There is again, a 5-7 day wave apparent in the new cases graph in the USA. This suggests that each pulse of new cases infect the next cohort of new cases. It is amazing that this periodicity shows at national level and even global level. Maybe it is an artifact of the way the data is recorded, maybe not.

Maybe it is an artifact of the way the data is recorded, maybe not.

It must be related to recording. The case rate shows when the person was tested and recorded, not when he contracted the virus. A person may be sick for two weeks and may be tested at any point during that period.

David, thanks for your comments.

You're right, of course, that the data should be per capita. I don't know why the media don't get this and don't do it. Maybe they think the public won't understand it. (?)

I was mostly thinking of the shape of the curves, anyway -- the relatively smooth declines in the European countries, versus the recent oscillation in the US numbers. That definitely stands out as unusual, don't you think?

and in the top right hand corner, where they give "total test results in US", click the right arrow at the bottom of that box. That gives "total hospitalized in the US". I only discovered this a few days ago, so the only data I have are

If the John Hopkins sites archives their data, I can't find it. Can anyone? Disappointing if so. I don't see the point of that.

Try the WayBack machine may work for history:

It's just spinning right now... may be my internet connection or their servers may be overloaded. Typically this should work though.

Good idea, thanks. But any such data site ought to be archiving their daily data, IMO.

Agree... also WayBack doesn't seem to work for this site.

Thanks for trying again.