NOAA just released their global land+sea temperature anomaly for March 2020: +1.16°C above the 20th century average (1901-2000). That makes it the second warmest hottest March in their records, after only 2016, and the 4th warmest (most anomalous) of any month beginning in 1880. 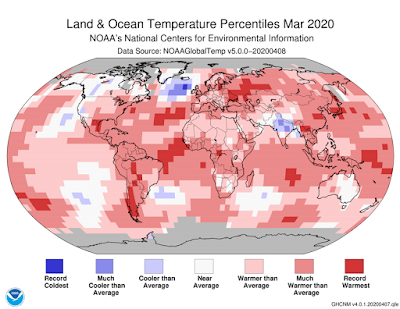 Thanks for posting this. It took me by surprise, because I'd been watching the NCEP/NCAR reanalysis temperature anomaly at Nick Stokes's place ... and in the reanalysis, March was quite a bit cooler.

The reanalysis is seductive because it's generated daily, but the reliability is only marginal. I should probably stop watching it and just wait for the actual data each month.

I see that the Atlantic cold spot is back.

That cold spot is remarkably persistent.

Last month, "David in Cal" was repeatedly posting here about the "promising" HCQ treatment for Covid-19. All of that "promise" was based on anecdotal evidence and tiny, non-randomized studies.

There are finally starting to be actual results from randomized controlled trials, and unfortunately the initial results suggest that

One study compared outcomes for 75 patients treated with HCQ and 75 not treated. No difference was found in recovery rate.

Another study found that HCQ, which can produce heart arrythmias, can be dangerous for patients with Covid-19, due to its interaction with effects of the virus itself, which causes heart damage in nearly 20% of patients.

President Trump encouraged people to take HCQ, saying "what do you have to lose?" These early results suggest that there is little if anything to gain, and if you actually do have Covid-19 and it damages your heart tissue, taking HCQ could kill you.

Why is Trump pushing that drug so aggressively?

Is he still pushing it? I haven't heard so much this week, but I haven't bothered watching his press rantings.

I think he was pushing it for really obvious reasons. Here's the chain of emotions involved:

(1) He hates bad news and doesn't know how to handle it.

(2) Coronavirus is bad news for him.

(3) For as long as possible he simply denied the risk at all (which was counterproductive in that it made things worse, but denial made him feel better at the time.)

(4) When it became impossible to deny, he started casting about for (a) people to blame [China, Democratic governors, the media, etc.] but also (b) anything he could latch on to as a sign of hope

(5) HCQ initially seemed like a sign of hope - he could make himself feel better by imagining that it would be a miracle drug that would cure CV-19 quickly, bring the economy roaring back, and he would look like a great leader for identifying himself with it

(6) Now HCQ no longer looks like it will save him so he's back to not knowing what to do and blaming others.

Five weeks ago (on March 9), David in Cal wrote: "the number of testing kits is rapidly growing into the millions. This problem is rapidly disappearing."

Five weeks later, the total number of tests administered in the USA has finally crept up to 3 million (not 3 million per day, which is on the low end of what we will need in order to re-open the country safely ... 3 million total in five weeks).

The good news is that the number of new cases per day seems to have stabilized, so the number of cases is growing only linearly, not exponentially.

We cannot re-open the country without either (a) a widely available vaccine, or (b) a program of massive testing and tracing & isolation of people who test positive.

That means millions of tests per day so that people who are going out in public can all be tested, and people who are working in public-facing jobs can be re-tested frequently.

The Trump Administration has no plan for this. What they are actually doing is:

* Coast along with Trump gaslighting the country on TV every night in the hopes that the people will blame someone else for the state of the nation;

* Try to get credit for *wanting* to re-open the country, while pushing the responsibility for doing so off onto the governors.

They are rhetorically demanding that the country be re-opened without doing the work needed to re-open it.

Last week he said: "One thing that we do see is that people are not gonna die from it. So if somebody is in trouble, you take it, I think. I would."

More evidence that hydroxychloroquine is not effective for Covid-19:

A malaria drug widely touted by President Donald Trump for treating the new coronavirus showed no benefit in a large analysis of its use in U.S. veterans hospitals. There were more deaths among those given hydroxychloroquine versus standard care, researchers reported.

The nationwide study was not a rigorous experiment. But with 368 patients, it’s the largest look so far of hydroxychloroquine with or without the antibiotic azithromycin for COVID-19

That's too bad. Maybe this canine worms treatment is the miracle cure?

The head of the US agency in charge of developing a vaccine against coronavirus said Wednesday that he was removed from his job for opposing the chloroquine treatment promoted by President Donald Trump.