Record Temperatures for May

More record temperatures were just announced for May:

NOAA: this past May tied for the warmest May for 2016.

NASA: this May was the warmest May in their records, beating 2016 by 0.06°C. Northern Hemisphere and land-only also were record highs, the latter by 0.09°C.

Here's a figure from a monthly email James Hansen sends out when the GISS temperatures are announced: 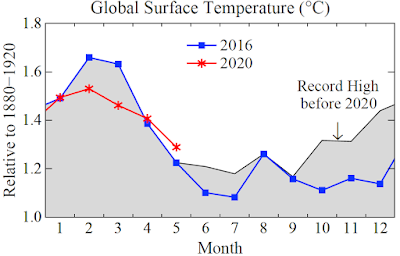 Both years were coming off an El Nino, though the El Nino that just ended was literally almost the weakest possible:

The only way this just-past El Nino could have been any weaker was if Jan-Feb-Mar had an Nino3.4 anomaly of 0.5°C instead of 0.6°C.

Just yesterday the Climate Prediction Center in College Park said the rest of this year looked mostly neutral, with an equal but small chance of an El Nino or a La Nina:

Their collection of model predictions are:

I'm not good enough to make any predictions. Also, they only get you in trouble.