I'm pretty late on this, and it's likely something you all know -- as was quickly noted in the comments -- but the ultrawarm Russian temperatures I posted about the other day are directly related to the oil spill in Russia that's threatening the Arctic.

The spill, about 20,000 tons of oil, is the 2nd largest in modern Russian history.

By comparison, the Exxon Valdez oil spill was 37,000 (metric) tons of oil. So this Russian spill is quite serious.

It comes from "Norilsk Nickel, a Russian metals mining giant. The oil leaked into the Ambarnaya river that flows into the environmentally sensitive Arctic Ocean."

The cause? Melting permafrost.

This is exactly the kind of tiered disaster that scientists have been warning about for decades. Anthropogenic warming? So it's a few degrees warmer. Humans can tolerate that. But look closer and you can see systems go awry.


“The accident was caused by a sudden sinking of supporting posts in the basement of the storage tank,” the company said in a statement.


One of the company's key co-owners is Vladimir Potanin who was listed as the richest man in Russia with the fortune of $25 billion. The billionaire has lost $1.5 billion due to the consequences of the accident, according to Forbes' Real-Time Billionaires ranking. 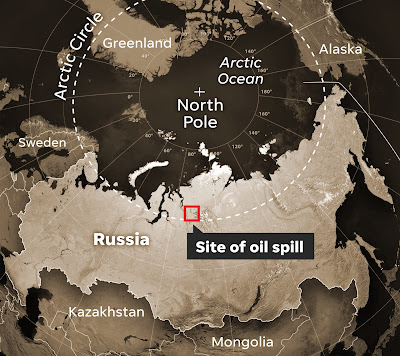